The (outgoing) minister of infrastructure and water management has submitted a proposal to the Dutch House of Representatives to introduce specific Dutch requirements for a number of light electric vehicles (LEVs). LEVA-EU said it has studied the proposal and concluded it is ‘in breach with EU legislation’.

The proposal concerns electric cargo cycles, electric scooters and self-balancing vehicles with steering wheels, while self-balancing vehicles without steering wheels such as monowheels or electric skateboards would still be prohibited on public roads. In the proposal, the vehicles are split into four categories: e-(cargo) cycle <55kg, all other LEVs <55kg, LEVs for cargo transport >55kg and LEVs for passenger transport >55kg. For each category, the proposal includes requirements for approval and surveillance, for road admission and for road use.

For category 1a, nothing changes except the limitation of the maximum width for a cargo cycle to one metre, said LEVA-EU. The vehicles in this category are allowed on the road without additional approvals. For categories 1b, 2a and 2b, an approval and surveillance procedure will be introduced, which will be fully assigned to RDW. RDW is allowed to make the rules, inspect the vehicles and then also supervise.

RDW has now drafted technical requirements for 1b, 2a and 2b. These requirements will be presented to a group of stakeholders in a meeting on Thursday 30 September. LEVA-EU has concluded from its analysis that the Dutch Government’s proposal to subject certain vehicles, excluded from Regulation 168/2013, to national approval is ‘in breach of European legislation’.

In the general explanation on the technical requirements that the Dutch Ministry of Infrastructure and Water Management will discuss with stakeholders next Thursday, it is stated that “these vehicles cannot be admitted to road traffic following other European regulations, which thus means that they are implicitly prohibited.”

LEVA-EU said it is ‘convinced’ that this conclusion is incorrect. Just as conventional e-bikes, electric cargo cycles, electric scooters and self-balancing vehicles are excluded from Regulation 168/2013 and are therefore subject to the Machinery-, EMC and RoHS-Directive. The Machinery Directive stipulates: “Member States shall not prohibit, restrict or impede the placing on the market and/or putting into service in their territory of machinery which complies with this Directive.”

The Dutch Government has accepted for conventional e-bikes to be admitted on the road without additional requirements. According to LEVA-EU, it is ‘illogic, inconsistent and illegal’ to subject e-cargo cycles, e-scooters and self-balancing vehicles, which comply with the Machinery-, EMC- and RoHS-Directive to additional national technical requirements. What’s more, there are no structural safety problems with these vehicles which would warrant additional measures and they are widely used in cities looking to substitute polluting freight and passenger transport.

In addition to the above-mentioned legal objections to the Dutch LEV framework, LEVA-EU said it is also ‘particularly concerned’ about the proposed categorisation and the proposals regarding dimensions and weight. “These proposals significantly complicate the lives of electric cargo cycle manufacturers, while they are not based on sound safety considerations,” said LEVA-EU manager Annick Roetynck. “Certain LEV dimensions have been determined on the basis of the finding ‘that an insufficient width of the cycle path leads to an increased risk’. This is the world upside down: manufacturers all over the world will be obliged to make a purely Dutch electric cargo cycle in function of the width of the Dutch cycle path.”

According to LEVA-EU, this goes ‘directly against’ all principles of European legislation, the single market and the free movement of goods. “If every member state were to introduce similar measures, manufacturers would again be obliged to build 27 different types to be able to be marketed throughout the EU, it said.

“In addition, if the Netherlands were to implement these very specific requirements effectively, this would undoubtedly have a negative impact on the supply of these LEVs in the Netherlands. Manufacturers will rather choose markets where they can use European harmonised vehicles. A shrinking supply will in turn jeopardise the sustainability of mobility in the Netherlands with all the negative consequences in terms of emissions, the fight against climate change, road safety, public health, etc. That would be a particularly bad thing for the Netherlands and for its citizens.”

LEVA-EU has also requested clarification from the Dutch Government on how these regulations have an objective in the Dutch public interest of which they constitute the main guarantee for the general Dutch interest. These are the legal European conditions defined in Directive (EU) 2015/1535 for issuing national technical regulations. The Netherlands should also notify the European Commission and the member states of this national initiative, said LEVA-EU, however, to date, there is no trace of such notification in the European TRIS Database.

For all the above reasons, LEVA-EU is requesting the Dutch government to waive the LEV Approval Framework and to no longer deny or obstruct access to public roads for all LEVs that meet the requirements of the Machine, EMC and RoHS Directives by means of impeding national technical requirements. This request also concerns self-balancing vehicles without a steering wheel. In expectation of the response from the Dutch ministry, LEVA-EU will also inform the European Commission of this request.

Previous Sea Otter Europe draws to a close with 45,000 visitors
Next Eurobike bids farewell to Friedrichshafen 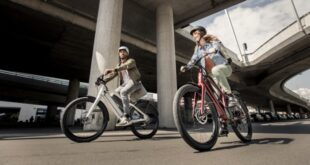