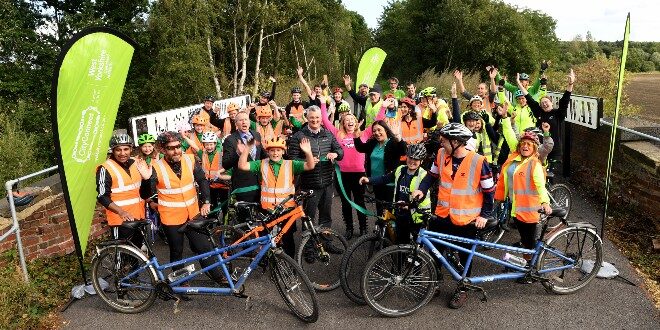 The latest £370,000 section of the Castleford Greenway was officially opened yesterday, 29th September.

The 1.3km section of the new walking and cycling route is part of a package of improvements in the area delivered in partnership by the West Yorkshire Combined Authority, Leeds City Council, Wakefield Council and Sustrans.

The new section, which is to the south of Methley village, links the existing National Cycle Network route 67 with Methley Junction. It uses the old Methley Railway line and connects the new Castleford Greenway at Methley Junction with the Trans Pennine Trail, building on existing routes to Leeds, Castleford and Wakefield. 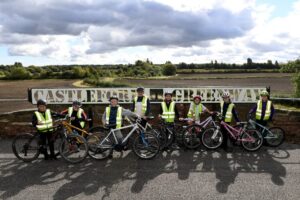 Teachers and pupils from Methley Primary School and Castleford’s Three Lane Ends Academy were joined at the opening by tandem riders from Open Country’s Wild About Wakefield project, which aims to help people with disabilities access the countryside.

Councillor Manisha Kaushik, the West Yorkshire Combined Authority’s Transport Committee lead member for active travel, said: “It is a privilege to join members of the community and our partners in celebrating the opening of this latest section of the Castleford Greenway, which provides a vital missing link to Castleford, Wakefield, the Trans Pennine Trail and the Wakefield Wheel.

“The greenway has seen a significant growth in usage since the start of the pandemic and we hope to see even more people taking advantage of it long into the future.” 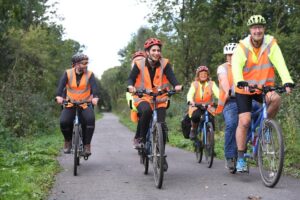 “During our COVID-19 recovery, we are creating new routes to make walking and cycling a more attractive everyday choice for exercising and commuting. Every new stretch of cycleway brings us nearer to the 500 miles of cycle network we are aiming to create across the Leeds district. In this case, it’s not only supporting residents in our villages, but it’s building active travel and leisure links with surrounding towns. These routes provide a safe place for people to boost their health and wellbeing, as well as contributing to cleaner air across Leeds.”

Mayor of West Yorkshire Tracy Brabin said: “Making it easier to walk and cycle is a vital part of my commitment to make transport work for people and tackle the climate emergency on our way to becoming a net-zero carbon economy by 2038. Traffic-free routes, such as the Castleford Greenway, not only connect us with the places we need to go, they are often a focal point for the community, providing welcoming places for people of all ages and abilities to enjoy walking and cycling.”

Rosslyn Colderley, director for Sustrans in the North of England, said: “I’m delighted to launch this final section of the Castleford Greenway. This is an important traffic-free section of the National Cycle Network that will help more people walk, cycle or wheel for work, school or leisure. The Greenway is a showcase for our work across the country to raise the standards of the Network and make it accessible for all. It is built to the highest design standards, with easy access for people of all abilities to walk, cycle, use mobility scooters or adapted bicycles.

“Over the last year, we’ve seen a big uptake in the numbers of people using the Castleford Greenway as a green lifeline to stay active and healthy outdoors. By creating links to places that people want to go we are helping more people to continue to choose active travel as a viable part of their daily journeys.”

The first section of the greenway, a 2km stretch between Fairies Hill Lock and Methley Bridge in Castleford, opened in March 2018. Extending National Cycle Network Route 69 over a new bridge across the Hallam Line led to the opening of a further link in December 2019. This was followed by another extension between Castleford and Methley Junction over the River Calder last October.

Now it is complete, the Castleford to Wakefield Greenway has created a 16km route by providing missing links in existing infrastructure. The scheme has received funding from the Leeds City Region Enterprise Partnership (LEP), delivered in partnership with the West Yorkshire Combined Authority, through the Leeds City Region Growth Deal – a £1 billion package of Government investment to accelerate growth and create jobs across Leeds City Region.