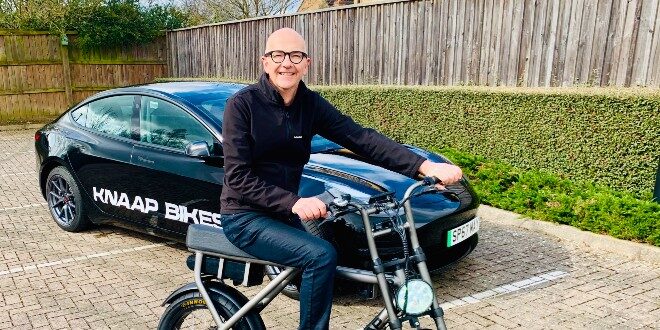 Knaap Bikes has gone all-electric in the UK with sales and demonstration appointments with cycle retailers.

Powered by Octopus renewable energy, the Knaap team will visit prospective dealers around the UK in electric cars specially fitted with tow bars and Thule cycle racks to minimise its environmental impact.

“As there have been no physical trade shows for us to attend as a newcomer into the industry over the past 12 months it has been exceptionally challenging to find a way to bring our innovative Knaap Bikes to the trade,” said Steven May, UK country manager.

“Our two-seater 140km range, pedal-assist e-bikes really do have to be both seen and ridden to be believed. With COVID restrictions meaning overnight stays were out of the question, we have had to think out-of-the-box to get our bikes in front of potential partners in a COVID safe, socially distanced way.”

He added: “After winning the prestigious Innovation from a Newcomer Award in December, we have been focusing on the very best ways in which to bring our bikes to potential partners throughout the UK and we already have partner dealers from St Ives to Gorleston-on-Sea and the Isle of Wight to Fife which is a real achievement after just five months in the industry.”

The next stage of the Knaap launch will see it launching its consumer brand awareness campaign with a raft of Premier League footballers, sports and social media personalities.

The Knaap Bike retails at £2,299. Knaap continues to look for partners across the industry and anyone interested can reach out to Steven May on 07546 931642 and smay@jdmproducts.com.