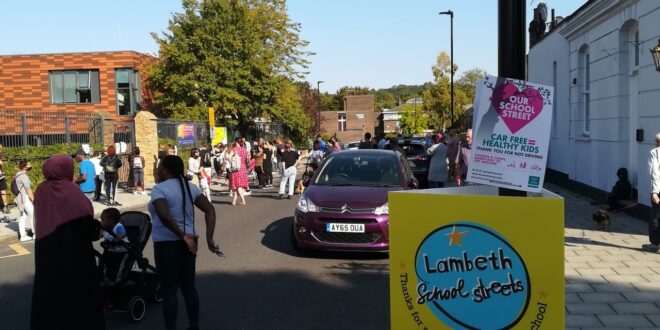 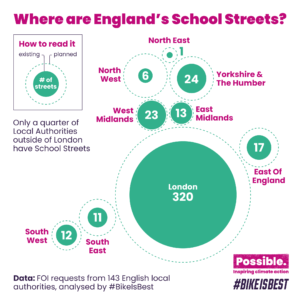 New data has shown the majority of local authorities do not have school streets in place for when UK school children return to the classroom, despite statutory guidance from the Government.

The #BikeIsBest campaign partnered with the climate charity Possible to submit Freedom of Information (FOI) requests to 151 local authorities in England, requesting data on School Streets.

In response to the COVID-19 pandemic, the Government issued statutory guidance in May 2020 on reallocating road space. This included an expectation for ‘local authorities to make significant changes to their road layouts’, including ‘encouraging walking and cycling to school, for example through the introduction of more school streets’. 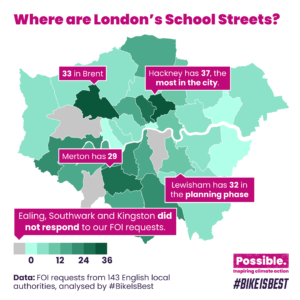 While London councils have the power to enforce School Streets using CCTV, School Streets can already be set up by local authorities outside of London using temporary barriers, retractable gates or lockable bollards. In order for councils outside of England to monitor School Streets using ANPR cameras, the Secretary of State for Transport needs to enable Section 6 Traffic Management Act. The Department for Transport said in January that it is “committed to providing local authorities outside London with the powers to enforce these. We will give more details of the timetable in due course.”

Adam Tranter, founder of #BikeIsBest, said:  “This new data is extremely concerning. Every day at #BikeIsBest we see the joy and convenience that cycling brings to children across the country. We know that without a safe and traffic-free environment, many kids simply won’t have the confidence to cycle. School Streets are great policy but many local authorities outside of London have missed yet another key milestone in enabling an active travel revolution to improve air quality.

‘”As schools fully re-open, many parents want to continue avoiding public transport and continue the active travel habits built in 2020. We’re at a vital moment to ensure that as many of those journeys can take place by cycling, walking or scooting. We hope that the release of this new data will encourage as many local authorities as possible to implement School Streets, fulfilling the grassroots demand for safer streets for our children.”

Leo Murray, director of innovation at Possible, added: “It has been fantastic to see the government champion School Streets with new funding and guidance for local authorities during the covid crisis. They’re a fast, low cost approach to reducing traffic harms that enjoys uniquely high support across the political spectrum.

“But outside London, their rollout is stalling; we need local authorities to start trialling School Streets now using the tools they have, and we need the government to give them the powers they need to use cameras to enforce them sustainably in the long term. Ministers have already promised to fix this – but what schools and local authorities need now is a clear date for when this is going to happen.”

Previous 2021: Cycling will continue to be a la mode (of transport)
Next Nominations open for 2021’s 100 Women in Cycling