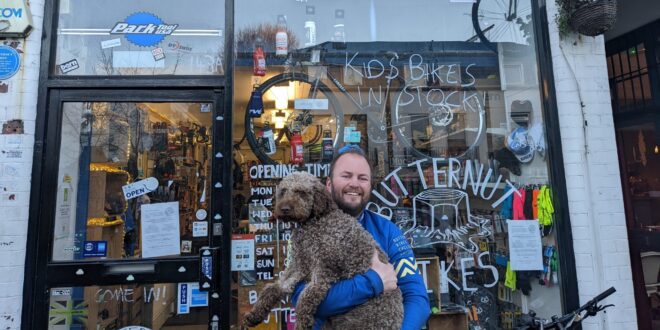 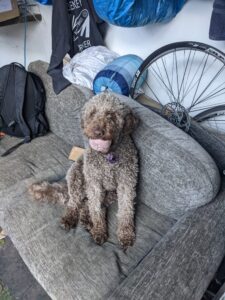 “It’s pleasantly chaotic and energetic,” were the words used by Gav Hudson, the owner of Butternut Bikes, to describe his fledgling independent store in London’s Crouch End. That was the exact atmosphere I found as I entered the long, narrow store, greeted first by Hudson and then by his famous shop dog, Sprocket.

Over a cup of tea in the Butternut workshop, flanked by stock of SRAM cassettes, Hudson explained the origins of the store he opened in July 2020: “I was working at a bike shop at the start of the pandemic, and it became apparent that there was a lot more demand for workshops and repair than could be met. People were quite distressed that they couldn’t get their bikes fixed, so it really came about as a need.”

After feeling that his current workplace was only interested in bike sales, Hudson decided to branch out on his own in early 2020, initially offering servicing and repairs from a church car park a few days a week.

Drumming up plenty of business Hudson was offered an indoor venue by the landlord of the nearby Railway Tavern in Crouch End, for use as a workshop while the pub was closed.

“We were the talk of Crouch End when everything else was in lockdown, as an essential business fixing an awful lot of bikes in a pub. I then reinvested everything that I took back into the business and then the opportunity for a shop came along and before I knew it, I ended up with a bike shop.”

Butternut now consists of four members of staff, including Hudson and his two mechanics Ben and Ricky, who both got jobs by visiting the store to say hello, one part-time worker and a number of mechanics who Hudson can call on when needed.

The story behind the name is no less coincidental – Hudson came up with the name after changing the name of his partner’s Wifi network, asking her ‘what’s something you like?’, to which she responded… butternut squash.

Shop philosophy
Butternut Bikes is a store driven by the philosophies of its owner Hudson, who has a clear mindset when it comes to his business.

“The thing that’s important for us with brands is really that I want to offer our customers good value and that doesn’t always mean that it’s the cheapest, but I don’t want our customers to go away thinking they could have got that product a load cheaper elsewhere, online for instance.”

Hudson keeps the number of brands available low, so customers are choosing from a price point within a brand, rather than deciding which name they would prefer.

Shimano components, popular with the commuters, Goodyear tyres, Muc-Off cleaning and maintenance products, and locks from either Abus or Kryptonite are amongst the stand-out brands on offer with Butternut. But there are also some products that Hudson has found are a tougher sell, most notably the premium tyre market and, owing to space restrictions, bikes.

“We’ve got a big backyard but what we don’t have is a shop floor space to sell bikes. It’s a bit of a chicken and egg scenario: we can’t get bikes until we have the space. We are tentatively optimistic about having a larger space, however, we feel we may have missed the bike boom sales boat, so maybe give it a year in terms of expanding the retail space.”

But Butternut has still been able to make some major sales, ordering bikes in on request. On my visit to the store, Hudson was just wrapping up the sale of a Tern GSD e-cargo bike  (retail around £4,500), totalling around £5,000 including accessories – the biggest single sale in Butternut’s short history. 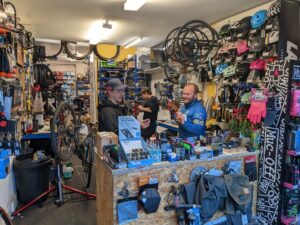 Trading practices
Establishing in the midst of a pandemic may not be ideal for many young businesses, but Butternut has adapted to its environments, as Hudson has put his own business practices in place to ensure the shop can thrive.

A significant focus for Butternut is online reviews, which Hudson says are both a blessing and a curse to any store: “Online reviews are really important for businesses and we found that if you don’t request the reviews, you don’t get that many.

“I have a theory that in a given week, if we get 100 customers through the shop, 95 are really happy, but you’ll get one every week who’s a problem, and that one invariably goes to leave a bad review for you, so you’re a bit beholden to that.”

Hudson has his own characteristic style of dealing with those negative reviews, as he will often honestly respond to those comments, and even gently challenge the customer if he feels the review is unfair. Discounting is also a regular topic of discussion in the trade. Butternut Bikes doesn’t offer NHS discount, but instead tries to save its reductions for customers in financial need.

When asked by NHS staff if they offer the traditional discount for health workers, Hudson explains that he will aim to get their bike back to them as quickly as possible, but that he prefers to save discounts for people most in need – NHS customers are often supportive of the initiative, Hudson said.

Next up for Butternut though, Hudson plans to improve communication across stores to help share knowledge, starting with small-scale pub meet-ups, while also expanding the flourishing shop cycling club, encouraging more women to get on the bike, and keeping an eye on any opportunities to expand the retail space to take the store to the next level.

Tales from the workshop – Gav Hudson

At the end of one of the lockdowns we were in a pub and a guy walked in with a small kid’s bike under his arm. Alex, who works for me, noticed that the forks were on backward, so he went over.

Of course I’ve got a multi-tool in a bag somewhere, so I pulled it out, swapped the forks around, and the guy said thanks very much. We went and sat down at our separate tables and I was a bit annoyed he didn’t send a pint over to say thank you.

A couple of months later, a bloke turned up one day and he said: “I’ve got my bike booked in for services. I don’t know if you remember me, but you fixed my kid’s bike in a pub about two months ago.” He said he didn’t want to send a pint over because there was a pandemic and he thought it might be weird, but he offered to buy us breakfast? Brilliant.

So he dropped his bike off with us, went down to the bakery and got some bacon rolls and some coffees for us all. I thought that was worth it all. Then he said he had been eyeing up getting some new wheels for his bike, those Princeton Carbonworks wheels. I said that they’re great, they are £3,500, he asked if we could get? And I said yes.

We ended up selling him – well, he sold himself – and we were happy to come very close to the price they were available for online – thank you Ison Distribution for helping us with that. It was our biggest sale to date until today was because we engaged with the community and fixed a kid’s bike. 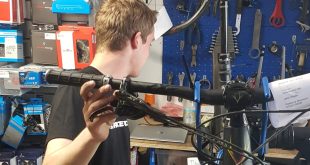 Tales from the workshop: Saturday boy to career path