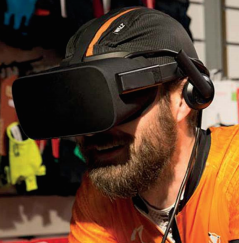 Is AR the future of cycling?

For many cyclists, the winter months are a time to retreat indoors, away from icy roads and freezing rain and into the monotonous environment of cycle training studios, whether at home or at a gym.

Whereas a conventional stationary bike gives the user a chance to stretch their legs, staring at the same stark white wall for hours on end is enough to leave even the most determined cyclist completely unenthused.

Whilst juggling a growing family and a busy career, Zwift CEO Eric Min found himself in this exact situation, but rather than accept the impending boredom, he decided to utilise the latest technology and invest in a platform that would change the public’s riding habits forever. I sat down with Min to talk about training, tech and what the future holds for his company.

Can you tell us the Zwift story?

My background is in financial trading systems, and I’ve been a long-time cycling enthusiast for many years. I’d been doing a lot of business in the corporate world, and I thought “You know what? I’m going to do something far more in line with my passion and aim it at the consumer market.” So I was thinking about what I should do next, and it struck me that living in London, having a young family and not having enough time to get outside meant I was riding quite a bit indoors. I was consuming all the products on the market like crazy to keep me entertained. The lack of innovation and investment that went into creating that experience just seemed crazy. I called up my partner, who isn’t a cyclist, and told him that I wanted to transform indoor riding, and he was immediately onboard. From there, we continued down this path of asking “what if we were to bring all the elements that we enjoy about outdoor cycling into this new world?”

We knew that the social aspect and the competition, whether it was competing with others or competing against your own previous performance, were going to be essential parts of whatever we were going to build. To be fair, the market had already thought of this idea 25-30 years ago, but back then, the [technology] just wasn’t available. It just wasn’t possible to create the experience that people wanted, so the idea fell by the wayside. In the modern age, everything we needed to create this amazing, immersive experience was in front of us; it was the perfect storm. Someone just needed to come in and truly invest in the concept.

What were the three most important things you did to make Zwift work?

The three things that were absolutely key for us were social media, cycling, and gamification. Social media has allowed us to grow organically and virally. Cycling is a great market that people have so much passion for, which is doing so well at the moment, especially in the UK and the States. And gaming platforms are advanced enough these days that you can take those two other elements and completely immerse them in a created world. You can ride with your friends; you can go to places that in reality don’t even exist; you can take your passion wherever you want.

What did you take into consideration in designing the platform’s visuals?

In the beginning, we decided that it was very important for us to pick a specific location so we could upload data to Strava. We found an island in the South Pacific, where we knew that there weren’t any pre-existing tracks. What we really wanted to do was create our own map. We did experiment with real courses; the first real course we made was the Richmond World Championship course. That was a big hit, but the community seems to respond far better to our fictitious world. We did London, which was a bit different, because we took people from the roads of London to Surrey. I can honestly say that the virtual roads that we’ve created are more interesting than the reality.

How has the public reacted to the various maps?

I think what we’re learning is that the community likes fictitious maps. When we make our own routes, we have unlimited creative license. Currently, all maps are still roadbased; in the future, we could be cycling on anything. The first thing we did when we created Watopia was to make transparent glass tunnels. It’s so much fun, and it’s just never going to be possible in the real world. You just can’t experience that anywhere else.

How many people are currently using Zwift?

I don’t know the exact numbers, but what I can tell you is that we have 180,000 unique accounts. Not all of them are active and paying right now, but that’s how many people have signed up and used the service.

Why did you decide to make it a subscription service?

My last business was a subscription service, although those subscriptions were millions of dollars from giant corporations. The reason why a subscription service makes a lot of sense for us is because we put out updates once a month. The system is constantly evolving. It’s no different to subscribing to Microsoft Office these days. People love our updates, so it’s a model that works for us. It’s not just a one-off product, it’s a living product, so it makes sense to give people the option to carry on benefitting from everything we do to it each month.

What does an update to the system look like?

We have three different experiences. We have maps, and the maps have expansions much like in a videogame world – that comes as part of the monthly service. Then we’ve got three different modes. You can go on a freeride, you can do a workout, or you can take part in an event. All of those modes happen in the same map space, so we balance the upgrades around them. This month, our upgrades may be based around a new map expansion, or it could be to create new events. There are actually some really interesting things coming with future updates.

Can you tell us a bit about upcoming updates?

Well, we’re looking to add completely new maps, so that will be a big development. We’re also close to adding a voice system. That means users will be able to talk to other people using Zwift, and chat whilst on rides. This will massively boost the social element and bring our users closer. It’s really exciting stuff.

Group rides traditionally take the same routes every weekend; do you see the same trend on Zwift?

When we create a new map, everyone wants to try it. It’s like taking you to Italy for a ride. But once people get used to that map, we find that they start to discover the route that they love. If you’re like me, you’re going to go up the hills more than the straights. Some other guys prefer the flat areas and faster paces. When people find the routes that they love, they really stick to them.

The VR market is making vast advancements at the moment. Do you think Zwift will integrate with VR on a greater level?

In the future, the market is going to be split between virtual and augmented reality. The big problem with VR at the moment is the form factor; it’s just not conducive to a serious session. If you’re riding for a reasonably long time, you’re going to sweat all over the headset – it’s heavy and eventually you’re going to feel that weight. I think that’s probably about two to three years away from being a really viable option. I think the more interesting route is AR. Honestly; my experience is that if you have a 40” screen quite close to you, you don’t even need a headset. You get dropped right into the action and you’re really immersed in it. Not only are you visually seeing it, but you’re also feeling it through the trainer.

What advancements are coming to Zwift sooner?

I think the big thing for 2017 is the introduction of the Smartbike; it’s basically the next generation of stationary bikes. It’ll work straight out of the box with Zwift and we’re very exited about that. It will massively simplify and streamline the experience. The other big thing that customers can expect is a form of Zwift specifically crafted for runners. I don’t know exactly when we’ll see it, but it’s coming.

Was there a specific time when you knew that Zwift had done what it set out to achieve?

We have a highly engaged community. We host about 500 events a month – I’d say that our customers create about 95 per cent of those events. What we’re seeing is communities within the community, building and diversifying by self-regulating. That’s something that we’re so proud of. Seeing people wanting to invest their time into something we’ve created was a giant revelation to me. We’ve used that ethos and built upon it ever since.

What challenges are you still facing with Zwift?

Our biggest challenge is just convincing people to try it. We just want to push people to give it a go, because if you give it a go, you’ll love it. This winter has been a great time for Zwift. Loads of people have realised that when the weather is terrible, you don’t have to stop riding. But, as always, more people need to give it a go.

Where can people try out the service?

We’re in over 500 bike shops in the UK already, I would imagine that there are 50 studios around the world that already use Zwift. Our vision is to let every health club and every hotel have access to Zwift. Whether it’s cycling, running or on an elliptical machine, our goal is to keep people moving, and without a doubt, Zwift is the best way to do that.

Share
Previous La Vuelta 2017 and Santini: six jerseys for six stages
Next An interview with Sean Reynolds of The Bike Place