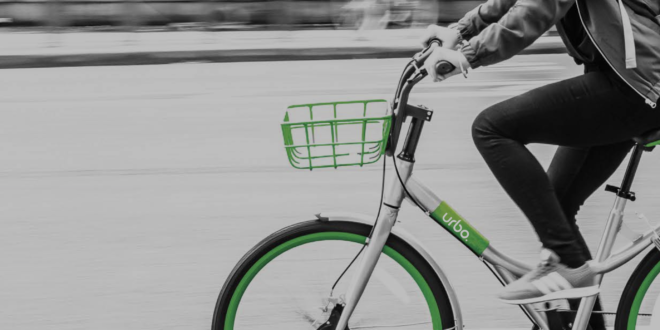 Urbo dockless bike-share bikes will be pulled from London in July. The Irish company has bikes in the boroughs of Enfield, Waltham Forest and Redbridge. The departure is due to "these locations no longer being suited to our business model."

Meanwhile, BikeBiz has learned that company co-founder Tom McGovern left in April following investment in the business from the Irish Government’s National Transport Authority which operates the Coca-Cola Zero bike-share schemes in Galway, Limerick and Cork.

The pull-out from London takes effect on 4th July. "We hope to be able to offer services within these areas again in the future," said a company statement.

Urbo bikes will be remaining in Ipswich, but it’s believed the company is to concentrate on its bike share scheme in Dublin. Nobody from Urbo was willing to discuss the latest developments at the company.

The Irish firm launched its first scheme in London in October last year, dropping 250 of its lime-green bikes in Waltham Forest with the cooperation of the borough council. (Walthamstow Cycles was awarded the contract to assemble and service the bikes.)

Urbo Solutions was founded by Shane Connaughton of Dublin’s Cycleways bike shop and Iain Cameron, managing director of Ireland’s Bike to Work scheme. The pair teamed up with Brian and Tom McGovern, founders of the Dublin School of Grinds private tuition firm.

“As a bike guy, I know the size of this industry, and dockless bike sharing is going to change everything,” Connaughton told BikeBiz last year.

"[Dockless] is the most disruptive thing that’s happened to our industry for a long time. The cash that is being pumped into the sector is unprecedented in the bike world.”

Earlier this year Brian McGovern told the Irish Times: "We have seed-funded the business ourselves to date and have just started our fundraising of €5m. We plan to go back to the market for a significant round B in the second or third quarter of 2018."

Unlike the fully dockless model Urbo’s bikes in Dublin operate a hybrid locking system which integrates a smart lock with a cable. Bikes have to be locked to existing bike stands.