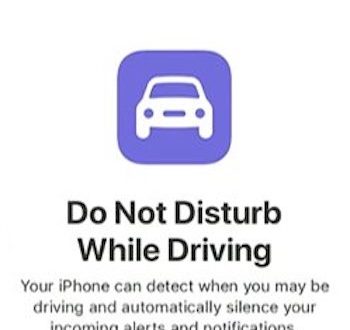 iPhone to get a “Do Not Disturb while Driving” mode

The next big version of the iPhone operating system will have a feature that has long been called for by active-travel advocates: a confirm-to-turn-off nag that blanks the screen and turns off alerts when the phone detects someone is driving.

iOS 11’s “Do Not Disturb while Driving” feature will auto-reply to texts saying “I’m driving”.

Naturally, the option will be, er, optional but nevertheless it’s a worthwhile feature that could prevent a great deal of distracted driving, and therefore save the lives of road users, including motorists, pedestrians and cyclists.

It works by using Bluetooth, GPS and wifi doppler measurements to detect when somebody is driving, and both blank the screen and hide incoming alerts, or just allow satnav features.

Android phones have had a similar feature for some time. Blogger Richard Masoner of Cyclelicious said: "I’ve had to disable this option on my Samsung phones for several years now, because I’m usually on bus or train."

Apple claims its feature can tell when the phone user is driving. Passengers will be prompted to disable to function, said Apple.