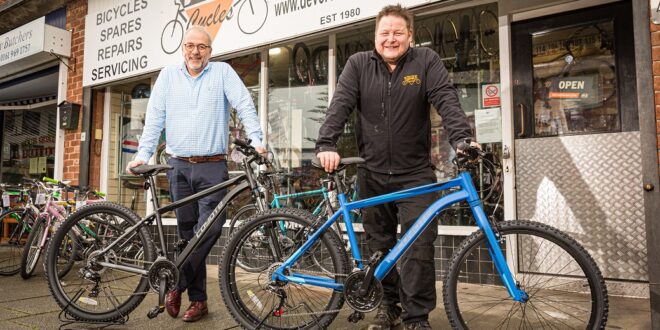 The brand, owned by India-based Hero Cycles, is celebrating the service provided by its network of local bike shops, which has proved invaluable during the pandemic.

Independents’ Day UK is a campaign that exists to support and promote independent retail businesses across the UK all year round, but with an annual focus on 4th July. Independents account for about 65% of the approximately 290,000 retail outlets in the UK and are at the heart of local communities throughout the country.

Insync, which has its Hero Global Design Centre in Manchester, sells its bicycles through a network of around 400 independent bike dealers nationwide, a number it is looking to expand upon.

Bike shops have remained open throughout the COVID-19 pandemic as one of the few businesses able to continue trading in lockdown. Cycling has experienced a boom period over the last few months as thousands have taken up the sport as one of the Government’s permitted daily activities. Others have taken to the saddle to commute to avoid the use of public transport.

Wayne Clarke, head of IBD sales at Insync, said it was important to champion local shops, both on Independents’ Day and all year round.

He said: “Independent retailers are the lifeblood of the high street, offering diversity of choice and a personal service. At Insync, we are proud of our independent bike shops, which offer a wealth of knowledge to shoppers. They usually have the answers to all manner of questions related to cycling, as well as aftercare support to give you peace of mind. Local bike shops have contributed to the growth in cycling during lockdown, enabling many more people to take up riding, and we look forward to seeing this trend continue.”

Insync brand ambassador Shanaze Reade, an Olympic BMX rider and track cyclist, has always used local bike shops. She said: “When I started racing, I used an independent bike shop in Crewe and they were always supportive of me, helping fix my bike at short notice when it needed repairs and offering me advice whenever I needed it.

“They contributed to my love of cycling and I still call in to the same shop when I’m back home. It’s hugely important that we all support independent businesses to ensure the diversity of our towns and cities doesn’t die out. Their uniqueness and expertise undoubtedly contributes to bringing through generations of cyclists who may not have the same access to the sport if they did not exist.”

Case studies
Bolton-based e-bikes specialist Ebike Capital has built up a strong relationship with Insync after stocking its Lectro range.

The specialist shop opened to cater for the growing demand for e-bikes in May 2019 and has 100 models on display. It is the shop’s wide range of options, and the expertise of staff, that manager Pat Aherne and owner Martin Cairns hope will set it apart from other stores, which tend to devote only a small section to e-bikes.

“You go into a big retailer and 95% of bikes are mechanical, so we wanted to offer the end-user a different option where they could look at 100 bikes rather than, say, six,” said Aherne.

The shop advised a 92-year-old cyclist who had thought his cycling days were over. He took an e-bike but for a test ride and immediately placed an order. “He loved it,” said Aherne. “We get a lot of customers with impairments, for example, hip and knee replacements, lung or heart conditions. They’ve cycled all their lives and once they get on an e-bike they realise they can do what they did before.”

Insync partner Ian Collins had told his high school careers teacher of his dream of owning the independent shop that is now his, Devereux Cycles in Sale, Greater Manchester.

Having visited the shop regularly since 1982, he took the keys in 2005, taking over from previous owner Peter Devereux, who had taken him under his wing as an 11-year-old.

“I was very passionate about bikes growing up and my mum was a single parent so we didn’t have much money,” says Ian. “I came to the shop not long after it opened and Peter took me under his wing and helped me because he knew my situation.”

The business is a real family affair, with Ian’s son, Kyle, working full time in the shop and sharing his dad’s love of bikes – regularly impressing customers with his photographic knowledge of the facts and figures of various models.