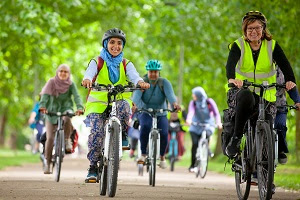 Innovators ‘show the way’ to encouraging active travel during COVID-19

The ‘golden age of cycling’ that Boris Johnson has suggested may dawn as we emerge from the COVID-19 crisis could be a health and environmental benefit to UK citizens. But is it possible for cycling to be relevant to more than a niche group in our society?

Climate and energy charity Ashden identifies and showcases some of the most inspiring organisations that are working to radically reduce carbon emissions across the world. The experience of four Ashden champions of active travel could provide policymakers with valuable lessons about how to put cycling into the reach of more people and groups that might normally be excluded:

– Swytch e-bike, which sells a universal kit that converts any bike to an electric bike, increasing cycling accessibility
– Waltham Forest Council’s ‘Enjoy Waltham Forest’ cycling and walking programme and Bogota’s ‘Plan Bici’ which have both successfully increased active travel with dramatic community and environmental benefits
– The Active Wellbeing Society based in Birmingham which encourages people living in deprived areas to get cycling and are now loaning their entire fleet of bikes to NHS frontline workers during the COVID-19 crisis

The Swytch e-bike kit turns any bike into an e-bike, broadening cycling appeal, keeping people safe
Cycling has increased during lockdown and bikes are being used as a safer alternative to public transport, for recreation and fitness, and for deliveries. But for those who haven’t been on a bike for a while, or need an extra energy boost, the Swytch e-bike conversion kit is a great solution. Swytch’s kit includes a new front-wheel equipped with a motor and a battery pack that attaches to the handlebars. The kit can be installed on any bike, making electric bikes more affordable and accessible. It’s also discreet – a psychological plus for anyone a bit shy of revealing their fitness level.

“Our job as innovators is to make environmentally friendly technology that people want to use because it’s cool,” said Swytch CEO and founder Oliver Montague. “That way, a global change to a more sustainable way of life will happen naturally.”

The Swytch e-bike kit is light and durable, easy to fit and disc-brake compatible. It is also long-lasting with a very low fault rate. An extra benefit is the considerable saving of embodied carbon as you can keep your existing bike.

Local Governments embrace active travel – from Waltham Forest to Bogota
The London Borough of Waltham Forest and the Colombian city of Bogota both have growing populations and thriving economies, but they also face worrying levels of traffic congestion and air pollution. While the two places are thousands of miles apart, their leaders have used the same core ideas to promote better health and economic growth.

After several incremental approaches to address Waltham Forest’s traffic, air pollution and health problems failed, the deputy leader of the Waltham Forest Council, councillor Clyde Loakes, himself a keen cyclist, launched an ambitious plan ‘Enjoy Waltham Forest’ to revolutionise active travel in the borough. Using £30 million of funding from the Mayor of London to improve the take-up of cycling and walking in the borough, dozens of streets in Walthamstow and Leyton were part-closed to stop rat-running, and 20 mph speed limits were introduced, as well as 29km of segregated cycle lanes, 207 improved pedestrian crossings (which include pedestrian/cycle/blended crossings) and 31 pocket parks. In Waltham Forest, the highways department works closely with the public health team, and independent research commissioned by the council suggests the programme is already increasing life expectancy.

Similarly, Bogota, the capital city of Colombia, was determined to shift the balance away from private cars to cycling and public transport – which is the way that most lower-income people commute into the city. A ‘Plan Bici’ – Bike Plan was launched in 2015 by the then mayor, Enrique Penalosa, which involved integrating the plan into all city hall departments work programmes and create a cycling revolution. The tourism department, for instance, promotes Bogota’s Sunday Ciclovias when 120km of roads are closed to cars. Bogota has big ambitions to become the world cycling capital and has installed hundreds of miles of cycle lanes and seen a big impact on air quality. The city is integrating cycling culture into education, workplaces, and healthcare with impressive inter-departmental communication from the city hall.

Cara Jenkinson, Ashden’s cities manager points out there are some similarities and successes that both projects share which other policymakers can learn from: “As cities in both the developed world and emerging economies look to cut air pollution and congestion, Waltham Forest and Bogota offer inspiring examples to follow. Both regions have encouraged wide participation beyond the usual cycling and walking enthusiasts.

“For instance, in Waltham Forest women’s cycling groups have flourished, including JoyRiders and Cycle Sisters both formed by Muslim women but which are inclusive of women from any religion. And in Bogota, the Transport Department works closely with the Department for Women to encourage more women to cycle.” Both Waltham Forest and Bogota have focused on communicating the wider community benefits – more pleasant public spaces, better health, new jobs and meeting carbon reduction targets.

Outside of the COVID-19 crisis, Big Birmingham Bikes encourages adults and children living in deprived areas to get cycling and give away thousands of bikes to local residents. The scheme reconditions bikes and distributes them from Wellbeing Centres and Community Hubs. It also works with schools, provides adapted bikes for disabled people and runs community cycling groups. Bikes are loaned out for free on condition that users commit to engaging in cycle lessons, such as Bikeability, before they receive a bike, and commit to ongoing and regular use.

“It’s great for the government to encourage cycling, but if you don’t have a bike, you don’t have that option,” said Karen Creavin, CEO at Big Birmingham Bikes. “And now during the coronavirus crisis, that is an even bigger problem than normal if people need to get to work a distance away but don’t want to take the bus. That’s why we have loaned out all our bikes to those in frontline NHS jobs.”

“All of these schemes show that in some regions, the golden age of cycling has been here for quite a few years,” said Jenkinson. “These great examples show how to get more people cycling and learning from them could be one of the cleverest things our Government could do.” 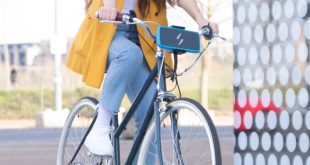