A look at one of the companies that entered this year's Lab...

This year’s London Bike Show saw the debut of the Innovation Lab, held in association with BikeBiz. This time we speak with Stqiue founder Greg McDonald…

Can you explain your product, why it is different and innovative?
Our product(s), the Multilever ML123 and ML14 are made of an exceptionally strong plastic that has been used in the automotive industry to replace metal parts on cars. It’s so strong that not one has broken in a workshop environment in 15 months of testing. It’s so strong & light that we can design holes in it to hold vital cycling knick knacks like split chain links and heart rate monitor spare batteries, or £1 coin holders, to cover those moments when you need to find them.

How did you come up with the idea?
I wanted to make a tyre lever out of this strong plastic, and then had the idea of combining it with a multi-tool, to cover just the few parts you need when out on a ride, rather than lugging a full workshop’s worth of tools with me, as most multi-tools have more tools on them than you’ll ever need on a bike ride.

How hard was it to get started?
It took a while to design it. We had to test the material in field trials. We then had to design in the multi-tool functionality, which took a while longer. Tooling up at each stage took time and cost us money. Did you use crowd funding like Kickstarter? Yes, we funded some of this work on Kickstarter, in Aug-14. If so, how did that go? We were successful AND delivered all pledges on time, which is fairly unique amongst Kickstarters!

Can you pick out any key milestones in the development of your product/company?
Other than the successful conclusion of our Kickstarter campaign, the most obvious milestone was the launch of our first product (ML123) at the NEC Cycle Show in Sep 2014. We then launched our second product, the ML14, at the London Bike Show.

Read more on Stique at the official site.

There’s further reading on the Innovation Lab online on BikeBiz.com. 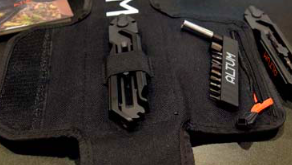