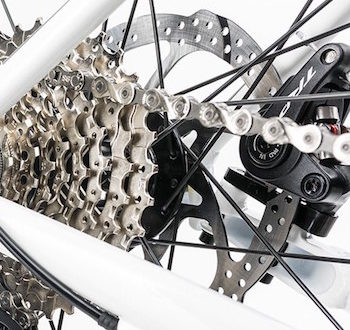 An industry representative body says road discs are safe until proven otherwise, and that no evidence of injuries inflicted by use of road disc brakes in the pro peloton has yet been verified as accurate. The World Federation of Sporting Goods Industries adds that 15 million disc-brake equipped bikes have been sold so far (mostly MTBs) and riders of those bikes, including professional mountain bikers, are satisfied the brakes pose no safety risks.

The WFSGI has released a statement following an incident at the recent Tour of Abu Dhabi which resulted in some from the pro peloton using claims from crashed rider Owain Doull to assert that disc brakes were not safe for use in road racing.

"We can say that a disk brake accident can, most likely, be excluded," claims WFSGI, which represents bike manufacturers.

"Twice within the last 10 months riders and other stakeholders of the cycling sport accused disc brakes of having caused injuries to a rider or their material. The WFSGI has taken these complaints very seriously and investigated both accidents in order to have a clarification before making any statement," added the organisation, claiming that no evidence has so far been submitted that stands up to scrutiny.

"Safety is a major concern to the industry and [for] all cyclists," says the WFSGI statement.

"One of the concerns in pro racing is the fear of different brake performance within the peloton leading to potential incidents. It shall be known that some material/combinations currently used in pro racing already show a clear difference in brake performance. Some combinations may not even live up to the legal requirements set by international standards (CEN/ISO) for commercial bicycles.

"That’s why the UCI working group has identified this key point and is looking into ways to improve the level of safety for pro riders by enforcing minimal standards of brake performance. That can be taken as a starting point to eliminate concerns of different braking performance regardless the brake system used.

"The industry agreed with UCI, CPA and AIGCP on rounded disc brake rotors in order to react on the perceived risk by riders, as well as to support a faster exchange of the wheels from neutral support and team’s service.

"Today our industry has sold already more than 15 million disc brake bikes to the public market. Most of these products are sold for MTB or cyclo-cross, city use, but also the number of products sold for road racing is growing rapidly.

"The argument that pro racing is different than amateur racing or the commercial market is absolutely heard by the industry as well."

The WFSGI concludes that it will "continue to work closely with the UCI, CPA and AIGCP in order to make a smooth introduction of disc brakes into professional road racing."

Meanwhile, the CPA – the pro riders’ union – said in a press relase that it had sent the UCI a "legal warning” because it is “very concerned about the situation that has arisen since the authorisation to use the disc brakes during races.”