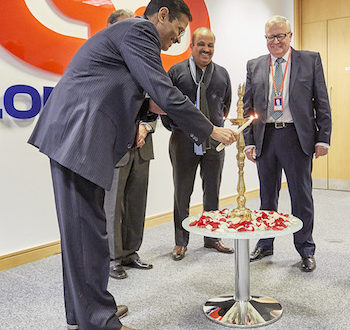 Announced last November, Hero Cycles of India has now officially opened its Manchester-based global design centre. The £2m facility is in Manchester thanks to the 2015 tie-up with Steven Walsh’s Avocet Sports.

Hero Cycles chairman and MD Pankaj Munjal cut the ribbon at the "Hero Cycles Global Design Centre" – or HGD for short – at One, Central Park, Manchester, a short distance from the National Velodrome in Manchester, the home of British cycling.

The HGD will be home to the expanding company’s design, testing and R&D functions, and currently employs 25 full-time staff. Four apprentices under the government’s recently enhanced Apprenticeship Scheme will also join the company soon.

A number of other cities across Europe were considered for the design centre, including London, Amsterdam, Copenhagen and Berlin, but investment in the UK’s Northern Powerhouse came, according to Munjal, thanks to Manchester’s "strong affinity with cycling culture, its unquestionable design and engineering heritage and the access to talent."

He added: “With major expansion plans in Europe, this design centre will help us produce technology and design to cater to differentiated products to suit the needs of different European markets.

“Our strategy is twofold; to develop British brands here in the UK, build them and export them across Europe, Africa and India and secondly, to increase the value of our Indian-based bike brands.”

Avocet chairman Steven Walsh said: “With half the business community around the country confused after Brexit, the decision to locate the Hero Global Design Centre here in Manchester is fantastic news.

“Hero and Avocet have together embarked on a strategy of developing their brands across Europe and the rest of the world. Working with the Department for International Trade and other organisations there is an extensive programme for sales expansion beyond the UK shores.

Hero Cycles was founded in 1956 and claims to be the largest cycle manufacturer by volume in the world.