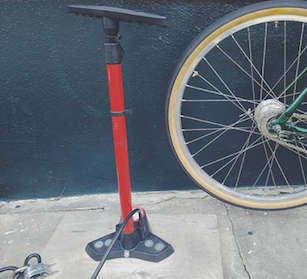 Isambard’s Cycles, situated at the top of the famous Brick Lane in the London borough of Tower Hamlets has attracted the attention of the national media this week due to the actions of the local council.

The shop, which is well known in the local community for its cycle advocacy and outstanding service, was threatened with a fine from Tower Hamlets Council for placing a free-to-use pump directly outside its premises. The official reason for the £100 fine was the ‘obstruction of a public highway.’ After a widespread demonstration of support from the public, the council has now agreed to waver the proposed fee to keep the pump in place.

According to the shop, this is not the first time that the council has objected to its free-to-use furnishings; earlier in the year Isambard’s received a warning about a small wooden bench to which the pump was attached. After removing the bench, the same enforcement officer later returned to take pictures of the remaining pump.

A statement from Isembard’s said: "The pump issue has stirred emotions more widely than we might have anticipated, because it succinctly illustrates a much larger issue about the attitude of councils, and TH in particular, to small business. In broad terms, one of the fundamental roles of a Council, surely, is to facilitate enterprise, endeavour, and innovation amongst local businesses, in order that an area long-renowned for its individual character loses none, or as little as possible, of that to the steady march of faceless corporate money.

"It is hard work doing business in TH. I think most local business owners would say the same. Our extortionate business rates are spent setting up hoops and hurdles for us to jump over and through. We pay £8,000 a yer in rates at present. As it stands, within three years, that figure will have risen to £18,000, and we will have had to close up shop. These ‘rates’ are of course misnamed – as far as I can tell, we receive nothing in return. They are in fact a tax in the purest sense. Of course this should come as no surprise. Rather than providing a steering and guiding hand, a steadying influence, and benevolent support, the council behave like feudal lords to small businesses’ tenant-farmers – extracting whatever tithes they can without even a pretence of logical or moral justification."

The news comes just weeks after Tower Hamlets council came under fire from the public for fining a five year old girl £150 for selling lemonade on the street. According to the council, the young girl’s fine was issued due to ‘Publicly trading without a licence.’