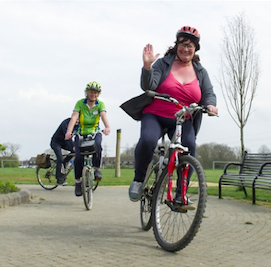 Improving infrastructure will lead to ‘seismic shift’ in women cycling

According to new research, women who do not cycle on a daily basis are most likely to cite perceived road cycling danger as being a barrier to them cycling more often.

The study, which was commissioned by cycling advocacy charity Cycling UK and conducted by ComRes, found that a shocking 44 per cent of women were discouraged from road cycling, whereas a only 26 per cent of men polled felt the same way.

The research, released to coincide with Cycling UK’s 100 Women In Cycling celebration, hosted in Birmingham this week, suggests that better space for cycling and offering more opportunities for women to learn how to cycle with confidence, would have a big impact on cycling participation.

Cycling UK Women’s Festival of Cycling coordinator Julie Rand said: “We could – and should – see a seismic shift in the number of women cycling in the UK but for this to happen, we need to create a safer environment for people to cycle in, as well as make cycle training more accessible. If we can help people overcome a misplaced sense of risk around cycling, then we know more women young and old alike, would choose to cycle more often.”

The study polled the public on various subjects and uncovered other key facts, such as the revelation that 20 per cent of women say they have never ridden in a cycle group but would consider doing so.

Rand continued: “We know there are thousands of women with a passion for cycling and dedication to helping others to experience the benefits of it. Our list of one hundred Women is Cycling UK’s way to thank a small selection of them, and to give them the recognition that they deserve.”