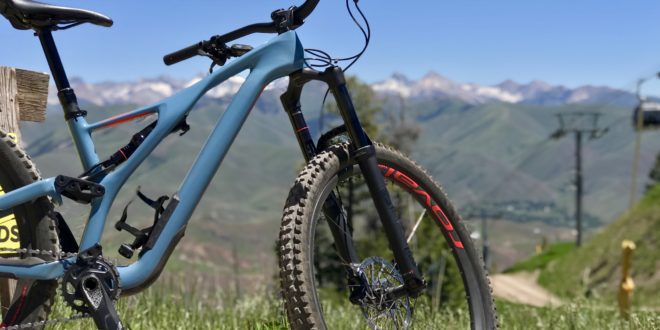 Riding in a pack, followed by the Mavic neutral-service car and storming up the hills around Idaho’s Sun Valley in themed kit locals might think a pro team is in town. In fact, it was a bunch of journalists riding Orbea Gain electric road bikes.

We’re at CrankTank Media’s first Impact Media Summit – "we" being 13 bike journalists – 11 from the US, two from the UK.

CrankTank is based in Ketchum, Idaho, the town next to the Sun Valley resort, and on their doorstep is some of the best mountain biking in the world, "bucket list stuff" says the company’s Lars-Erik Johnson. The resort has over 400 miles of singletrack, including the resort’s lift-serviced gravity trails. (The first ski chairlift in the world was created by a rail engineer for the new-build Sun Valley resort in the late 1930s.)

The riding is what Impact Media Summit is all about – that is, after some presentations over breakfast. At 10am, the editors are loaded on to shuttles to start the riding for the day. Day one was riding BMC and Brose-equipped Specialized electric mountain bikes on the famous Greenhorn-Imperial trail (it’s one of Idaho’s many world-class trails that’s open to e-bikes) and taking the new Specialized Stumpjumper down the resort’s new flow trail on Bald Mountain.

After ascending in a gondola and then linking Saddle Up, the new Mindbender and the River Run Trail riders can experience a 9.5 mile downhill, the longest in the US.

Day two was a ten-mile gravel ride on bikes from Turner and Moots to the Galena Lodge for lunch and then riding on the Galena Summer Trails on Stumpjumpers and BMC’s Speedfox and Agonist MTBs. (There’s a 47-mile network of trails north of the lodge.)

All of the editor’s bikes were shod with Maxxis tyres on wheels from the carbon wheel-brand Reynolds. Editors were supplied with MTB riding kits from 7Mesh and road riding gear from Wattie Ink. Shoes were supplied by FiveTen, and tech socks from Swiftwick, which makes in the USA. The editor’s heads and eyes were protected with helmets and sportswear from Rudy Project. Skin was protected with sunscreen and lipbalm from Beyond Coastal. Lubing was covered by Squirt Lubes. Hydration – which is key in high west desert conditions – was sorted with packs from Dakine. The summit’s beer sponsor (media summits have to have beer sponsors) was local craft brewery Sawtooth brew pub. Energy bars were supplied by Redd Bar – and breakfasts and beds by Ketchum’s brand new Limelight Hotel.

Some of the exhibiting brands will be launching product at Eurobike, which starts on 8th July, and Impact Media Summit was a chance to get editors on embargoed bikes and k

Ending out the summit tonight will be a Draft Meet-up discussing the often contentious issue of e-bike access to MTB trails.

The two-day summit is new for this year and is part of CrankTank’s growing number of events.