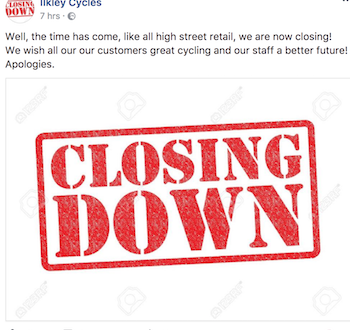 Ilkley Cycles has closed. The shop management posted a heartfelt message on Facebook today: "Well, the time has come, like all high street retail, we are now closing!"

The Yorkshire shop also apologised, adding: "We wish all our our customers great cycling and our staff a better future!"

In a later, bittersweet posting the shop joked:

"Spike Milligan’s grave famously says, ‘I told you I was ill’. We said, ‘We told you we don’t make any money…’"

A ski-touring equipment business in the same building is still trading.

Ilkley Cycles was founded in 1990 as JD’s Bicycle Workshop by husband and wife John and Ruth Hargreaves. The business was later taken over in 2012 by James Myers who started with the couple as a Saturday lad in 1996.

The business moved to new 3000 sq ft premises in 2014 and the name changed to Ilkley Cycles.

As BikeBiz mentioned earlier in the week the UK cycle industry is having a torrid time. It is possible that 1 million fewer bikes will be sold in the UK this year.