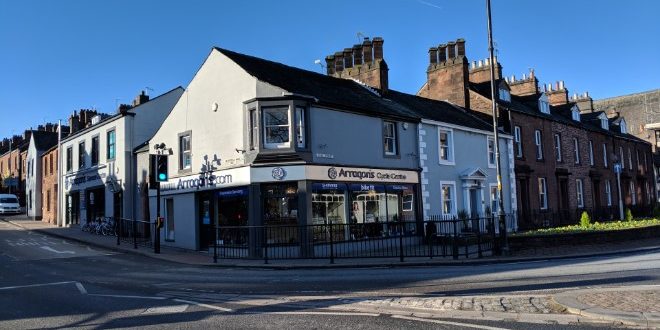 Small independent businesses are essential to retail – offering specialist products and services with knowledge and passion for the community, something that cannot be given online.

Arragons Cycle Centre is run by Phil and Sarah Graham with the help of a dedicated team of sales staff and cycle technicians. The business has been in the family for 50 years, with Sarah Graham’s parents owning the shop previously. And 2019 saw the store not only nominated in the 11th annual BikeBiz Awards last September, shortlisted in the Best Independent Bike Dealer category, it was also shortlisted in Indie Retail’s Best Small Shops competition 2019 for the second year in a row.

“The biggest thing for me was that our team believes that we deserve it, and we’re worthy of it,” says owner Sarah Graham. “It’s been really nice to experience being a business owner where I’ve got a team of staff who believe in themselves and believe that we’re doing the best that we can be.”

Adapting to change
We all know how much the retail environment has changed dramatically recently – but Graham says that Arragons Cycles has enjoyed a positive 2019 in business. The store has continued to evolve its offering to emphasise its service portfolio, which for the growth in e-bike customers in particular, has increased confidence over anything else.

“It’s not been without worry and fear, but we decided to adapt to the situation rather than to succumb to it. Service has been a massive part of that. We’ve always had a Shimano service centre and we’ve always tried to keep on top of new tools as they come out, and new technology. But we’ve put ourselves a bit more at the forefront this last couple of years.”

The preference to shop online over the high street has become the norm for many consumers and some retailers have cited the internet as a major factor in the rise in empty storefronts – which last year rose to their highest level since January 2015. But that doesn’t mean it’s all doom and gloom – there are many benefits to shopping in a brick and mortar retailer, especially when a store does not compete with online prices and instead focuses on its customers’ needs.

Graham says she hopes that retail is coming out of this difficult time, one of the reasons being the adaptation into service. “The internet has been blamed for the declining retail, and I agree to some extent, especially with the aggressive pricing – which has probably been more profound in our industry,” she says. “But we do much more than just selling product, we give the after-sales and the bike fit. We do bike hire now, and I’m looking forward to what’s happening.”

The store has also established itself a bit more on the service side of the business, Graham says. “We’re not going to be around forever if people only buy online. I’ve probably done it myself, where you think that the online’s the devil, but we’ve used it to our advantage these last couple of years. We’ve been very active on the social media side of things. We don’t aggressively retail online but we do have our inventory of stock there, so customers can access the website and see what we’ve got in store.

“We’ve retracted and gone back to what we do best, which is bricks and mortar and service, and our customers are starting to see that, especially when they have problems like warranty issues, we make things so much easier when things go wrong.”

Celebrating retail
Last year’s Best Small Shops competition had a focus on consumer engagement and how independent retailers promote their businesses to the local community and consumers. Shortlisted retailers were invited to attend the reception at the Houses of Parliament on 5th November where they had the opportunity to meet with MPs, trade representatives and industry peers.

Speaking at the event, Meryl Halls, vice chair of the Independent Retailers Confederation, said: “It is great to be able to celebrate the lifeblood of our high streets, our independent retailers, especially at this time of uncertainty and discord. “The role of an independent retailer can seem like a thankless task but they are nothing if not survivors. Small shop owners employ local people and contribute to local communities and we are so pleased to have been able to showcase the best of independent retailing and give a vision of how engaging and exciting our high streets can be.”

“It’s really nice to be celebrated,” Graham continues, “and be part of a group of businesses that are doing what we do well. The small shops award is not just our trade only, and we went down there not expecting anything other than to be part of the day.

“We got a lot from that because we spoke with a record company, a bookshop, a cafe and a barber store. They’re different to what we’re offering but what resonates is what everyone’s doing. We’re all enthusiastic, we all love what we do and we all try to please the customer bases that we’ve got. I’ve come away with new ideas that don’t necessarily relate to the bike trade, which is great for us. We try harder every year as well, we like being part of that small business celebration. Already I’m thinking about what can we do next year to make our entry or our nomination justified. It keeps us on our toes, if nothing else, so it’s good.”

#TeamArragons
So what does the store have planned for 2020 and beyond? 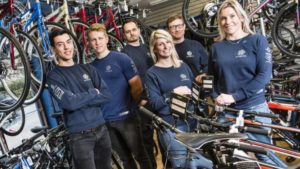 “Probably building on the team that we started this year,” says Graham. “We thought we needed to really do something to make us recognised when we’re out racing, so we’ve made our Team Arragons. We want to build upon that.

“We set that out not to be elite, not to be cycling or triathlon only, but if anybody wants to represent or feel like part of a community then all you need to do is buy the jersey. We haven’t got like a membership as such, just the feeling of belonging.”

The community aspect of owning a bike shop has always been “massive”, Graham says, she and her husband Phil took over the shop from Graham’s dad in 2003 and they’ve always tried to be involved in what’s going on in the community.

“Whether that’s putting on events for people or supporting the local bike clubs and triathlon clubs, I think you have to put yourself out there and be willing to get amongst what’s going on, whether it’s an activity or celebration. Being part of the community is key for us and we want everybody to want to be part of our team.”

“We’re just trying to push on, “ she concludes. “I’m really tired of the whole negative: ‘What’s happening to the high street?’ It’s very sad and horrible to witness. But I think you’ve got to move beyond that and realise that there’s still people that want to support shops like mine. I do believe that we are serving the community well.”