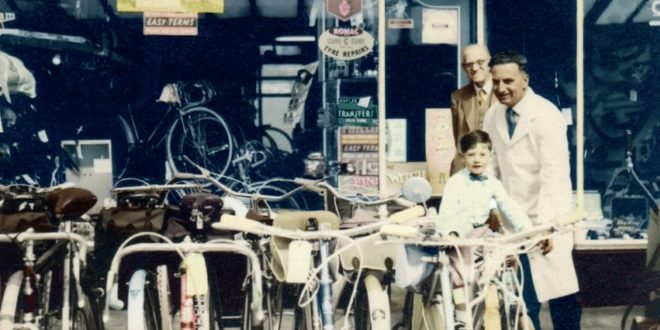 Ken Foster’s Cycles is celebrating its 65th anniversary last month. Rebecca Morley discovers the history behind the store and how much the retail environment has changed in that time

Ken Foster’s Cycles is a bike shop with a history going all the way back to 1954.

The retail environment has changed dramatically in that time too, with the rise in internet sales causing high street footfall to decline, so much so that the national town centre vacancy rate reached 10.3% in July, a figure that has been described as ‘concerning’.

This makes it even more remarkable that Ken Foster’s Cycles (formerly Foster’s Cycles) is celebrating its 65th anniversary this year. It is now the oldest family-owned business in Chorlton, Manchester, says manager Sean McAdam, and is still trading from the same address.

“The celebration of our 65th year of trading is on Saturday 5th October. This marks the date Ken’s father Eric and grandfather signed the lease,” says McAdam. We are having an open day with coffee and pastries, vintage bicycle and motorcycle display and, weather permitting, a celebration ride along the Fallowfield Loop with a vintage theme. All are welcome on any cycle – with the emphasis on family the mainstay of our business model.”

Modern challenges
As we’re all no doubt aware, the internet has caused an almost unrecognisable change across the retail industry, with many businesses struggling to keep up with the constantly evolving trends. Some stores have closed down as a result, while others have decided to focus more on the service side of their businesses.

“The challenges faced by traditional retailers on the modern-day high street have changed significantly over the years,” says McAdam.“The cost alone of running a business has more than quadrupled in the 35 years I have been here. Utility bills have soared, business rates and the introduction of workplace pensions, although I don’t begrudge them, all have a financial burden on running a small family business.

“It is significantly harder to run a legitimate business in the UK in today’s environment.” As for the marketplace, McAdam says it has “changed wildly”. There has always been competition, but Ken Foster’s Cycles welcomes it.

“We were once surrounded by four cycle shops. In the 1980s, we shared the same road with Sale Cycles – at one point the largest cycle superstore in the UK. There was always mail order, the forerunner to the internet and your specialist shops that dealt solely in lightweights.

“We were here when the Raleigh Chopper was the number one bike in the 1970s, embraced the BMX ERA of the 1980s and the emergence of the mountain bike and the demise through the foot and mouth outbreak – which I don’t think ever fully recovered. The Wiggo years, Olympics, Tour de France, the emergence of the MAMIL and the industry finally taking female cyclists seriously, of which we have a great relationship supporting Team Glow – predominantly a female cycle group from Manchester.”

McAdam also describes the ‘lack of support and dialogue’ within the cycle industry as a big concern – due to the blinkered approach to constantly renew models. “Its inappropriate launch of new models every season at the wrong time and its dumping of products on the internet to feed the mighty e-commerce machine has the largest effect on the IBD.

“I have witnessed the demise of some great shops that have been forced into a corner by suppliers to overstock in an attempt to remain with certain brands,” continues McAdam. “There are some suppliers who see the bigger picture and are not prepared to see their product devalued on the internet. We have a good relationship with several of them and see this as a direction to follow in order to continue to perform well.

“The workshop is continuously busy, delivering a high standard of work that we are extremely proud of, mirrored in the positive reviews left on Facebook and Google. We are constantly reinventing ourselves, but sticking with our core ideals of great customer service and having a great team of hard-working staff should see us through to the next decade and beyond.”

Family history
Eric Foster moved into his family to Manchester in the late 1930s, say historians Peter Topping and Andrew Simpson, who have written a booklet on the store’s history.

On 5th October 1954, Eric, with help from his father John, purchased a cycle shop in Chorlton from two brothers by the name of Wright, renaming it Foster’s. It had been a cycle shop during the war and the owners were exempted from national duty, as the cycle trade was deemed to be a ‘necessary industry’.

The early years were a ‘struggle’, the historians say, as the shop had been run down and did not have the Raleigh Franchise. At the time, there were several British cycle manufacturers, including Phillips, Hercules, BSA and Triumph. After a year of lobbying, Eric Foster managed to secure the Raleigh brand. In 1958, Raleigh started to produce mopeds and later a scooter called the Raleigh Roamer – which the shop sold alongside the cycles. Later, a second shop was opened on Withington Road in Withington, and a third on Northenden Road in Gatley Manchester. They were however only short-lived and closed after about five years of trading.

In 1987, Eric retired, aged 67, and Ken sold the larger showroom, retaining the two-shop site – where the business is still located. In 2011, another big expansion took place, with the showroom space extended, and then again in 2016, with the opening of a space currently used for the display of electric bikes. With McAdam now at the helm, Ken has taken a backseat role but is still actively involved with the business. 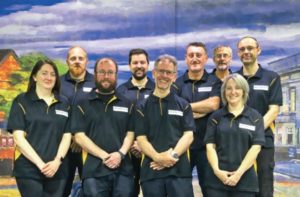 On what it means as a business to have been trading so long, Ken said he was “extremely proud to be able to carry on the legacy” of his grandfather and father, and is happy in the knowledge that the shop is well respected within the south Manchester area as a trusted and well-liked cycle shop.

The firm has also now embraced the modern retail environment with its own website and does trade online. However, Ken and the team still plans to continue operating from the shop on Barlow Moor Road.

Together, the team amounts to around 190 years of experience, which can help explain why Ken Foster’s Cycles has been trading so long and why it has been so successful. It may have been open for 65 years already, but it shows no sign of slowing down.

Credit for information and pictures: Peter Topping and Andrew Simpson. 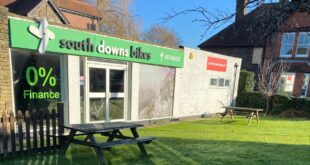