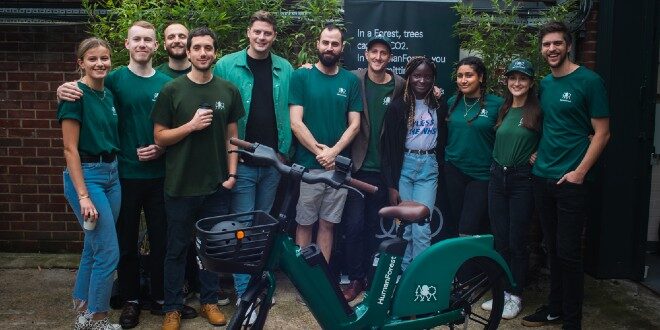 HumanForest has launched its new fleet of 800 e-bikes in London.

HumanForest gathered community groups, customers, local government and partners to hear how cycling can support people’s mental wellbeing whilst also protecting the planet. This was followed by a group ride from the HumanForest headquarters in Waterloo to Coal Drops Yard in King’s Cross.

The company recently raised £2.3 million in its pre-series A funding round, bringing its valuation to £32 million up from £10.2 million at the seed stage. HumanForest has also secured a series of advertising partners that align with its sustainability values, including digital wealth manager Nutmeg, Bloomberg L.P. and Oddbox. 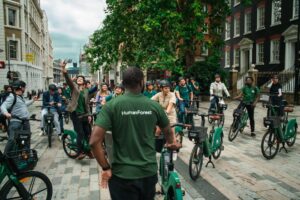 HumanForest provides an affordable and accessible way of cycling around London, with the company’s advertising-led model allowing consumers ten free minutes per day and costing £0.15 per minute thereafter.

Speaking at the event, Guilisasti said: “At HumanForest, we are committed to help remove CO2 from the environment with our truly sustainable fleet of e-bikes. We are building a sustainable travel movement and are ensuring that everyone can join us.

“Every single person gets ten minutes free riding, every day – providing Londoners with a means to create a cleaner, greener and more sustainable city for all.”

Check out HumanForest’s piece on how cycling can boost our mental health and general wellbeing here.