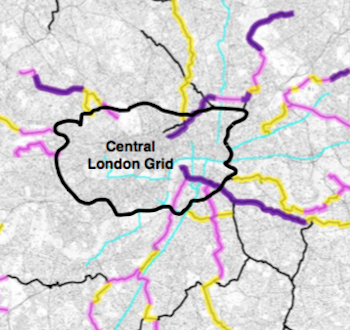 A new report from Transport for London shows increased use of the new and protected Cycle Superhighways, with children and their parents among the new users. TfL reports that 4695 cyclists are now using the North–South Cycle Superhighway in morning peak, which equates to 26 people on bikes per minute.

Since the launch of four new routes, there has been more than a 50 percent increase in the number of cyclists using cycleways compared to pre-construction levels, reports TfL.

8,400 cyclists are using Blackfriars Bridge each day in the morning and evening peaks – cyclists now account for 70 per cent of all traffic on the bridge.

Ninety percent of cyclists are now choosing to use the protected cycleways rather than the adjacent carriageways.

The TfL report stresses why providing for cyclists is so necessary: "By 2031, London’s population is expected to increase by approximately 1.3 million and the city will host an additional 800,000 jobs. With increases in population, more people are needed to cycle to help reduce overcrowding on London’s roads and public transport networks."

Construction of the new routes began in February 2015, with the first new route launched in November of the same year.

TfL reports that some motorised journeys are slower than previously.

"While reallocating road space has made journeys for motorised vehicles slower in some locations, improving the environment for pedestrians and cyclists maximises the efficiency of the road network, and over the long term will result in an increase in the proportion of people using sustainable transport," stressed TfL.

The new cycleways are civilising the streets of London – there’s less red-light running from cyclists, and more newcomers are also starting to cycle, says TfL: "Whilst it is still early to judge objectively the success of the new CS routes, observations are showing good compliance of traffic signals and other infrastructure, plus a wider appeal and use beyond commuter cycling, including increasing use by parents and children."

TfL’s new stats have been welcomed by the former "cycling Tsar", Andrew Gilligan: