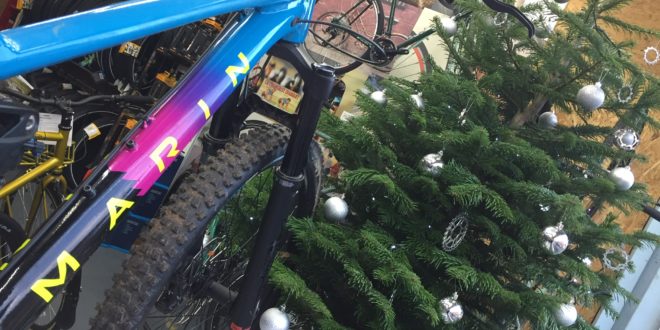 How was winter for the cycling industry?

Following an uncertain 2019 for retail, Rebecca Morley asks bike shops how they have fared during the winter period

Winter can be an uncertain time for retail – with poor weather potentially causing a decline in footfall on the high streets and more consumers shopping online for festive gifts – and this only adds to the uncertainty that has already been seen in the sector. This season has also seen some political instability, with the ongoing talk of Brexit followed by a December General Election – the first to be held in the last month of the year since 1923. But did this have had a negative impact on retail?

Recent British Retail Consortium figures point to a bleak picture  – 2019 was the “worst year on record for retail”, with total sales decreasing by 0.1%, compared with a 1.2% growth in 2018. Sales in November and December declined 0.9% compared with the same period in 2018. Helen Dickinson OBE, chief executive, BRC, said: “2019 was the worst year on record and the first year to show an overall decline in retail sales. This was also reflected in the CVAs, shop closures and job losses that the industry suffered in 2019.

“Twice the UK faced the prospect of a no-deal Brexit, as well as political instability that concluded in a December General Election – further weakening demand for the festive period. The industry continues to transform in response to the changing technologies and shopping habits. Black Friday overtook Christmas as the biggest shopping week of the year for non-food items. Retailers also faced challenges as consumers became both more cautious and more conscientious as they went about their Christmas shopping.

“Looking forward, the public’s confidence in Britain’s trade negotiations will have a big impact on spending over the coming year. There are many ongoing challenges for retailers: to drive up productivity, continue to raise wages, improve recyclability of products and cut waste. However, this takes resources, so it is essential the new Government makes good on its promise to review, and then reform the broken business rates system which sees retail pay 25% of all business rates, while accounting for 5% of the economy.”

But what has this been the case for the cycling industry? Recent data from Halfords, for the 14-week period to 3rd January, showed that its retail cycling sales were up 5.9% like-for-like in the period, with growth broadly based across the bike categories. It says its work to optimise the cycling space in its retail stores together with a more innovative and differentiated range has created a “better shopping experience” for its customers during the peak holiday period. This, in turn, has delivered strong sales growth as well as better margins and reduced working capital levels.

But its group online sales grew 27% –  with around 80% of Halfords orders collected in store indicating the increasing demand from consumers for click and collect models, online retail and e-commerce platforms.

Bricks and mortar
So what does this mean for physical stores over the winter period? How have bike shops fared  – and how optimistic can we be looking forward? Despite the uncertainty of how sales may look over the colder months, following a slightly bleak looking 2019, bike shops will always be needed to carry out servicing and repairs – maybe even more so in the wetter weather due to road conditions.

“Winter is always unpredictable but we have carried out plenty of services and repairs,” says Sue Wade, owner and director at Bikes For Good Causes. “Often because of the weather and in the lead up to Christmas, customers take the opportunity during the festive break to get their bikes serviced, ready for their return to work in the new year. Overall, bike sales were average for us, compared to previous Decembers.

“Weather tends to have more of an impact on bike sales but that said, January historically is more busy for us than December – possibly the New Year resolutions.”

Lily Beaven, project coordinator, Nottingham Bikeworks, described winter as, on a whole, busier than last year: “Only in the particularly rainy November did income fall in comparison to 2018. More people know about us, know where we are and want to support us, which is really encouraging to see. We get a lot more flat tyres at this time of year. Adverses weather puts more grit on the roads and the party season puts more glass, so puncture repair jobs double at least.

“However, the fair weather cyclists put their bikes in the sheds and it’s mostly the hardy commuters that bring their bike for a winter service. Overall there is a downturn in sales in December. We do try to take advantage of the Christmas consumer rush and try to encourage Nottingham to shop sustainably and buy our refurbished bikes, tickets to maintenance courses and gift bike services as Christmas presents this year. Kids bikes did particularly well this year and we deliberately keep these cheap at £35 to encourage more families to get active.”

“We have actually had a very busy last few months,” Garry Nicol, shop manager, Pedal Power Cycles. “The weather has been very poor so footfall is much lower than usual but we are good at keeping ourselves busy so we have done a lot of tidying, fixing up, planning and focusing on our online presence. This has translated to a lot of online or over the phone bike sales, mainly end of year models with large discounts.”

“Winter is going well, sales are up on last year,” says Adventure Cycle. “I would attribute that to cargo e-bike sales and despite the unrelenting rain, people are continuing to cycle. In some instances, that will be because they’ve made a conscious decision to replace at least one of their cars with an e-bike and hence they are committed to cycling as their primary mode of transport.

“These customers have needed to get kitted out with waterproof and hi-vis clothing over recent months. Christmas trade was good, again up on 2018, however November sales were unseasonably high, despite the weather. On the whole we don’t see a particular spike in sales of Christmas, we are definitely busier selling kids bikes and accessories however. January has also started strongly.”

Festive season
Nick Manning, partner at Beyond Bikes, says this Christmas has bucked the trend, with the shop coming off one of the best Decembers it has had in a long time, following an also strong November. “We had a steady flow of e-bike sales that certainly help to keep the lights on as far as business goes.  This December, we had a real mix of Frog bikes, sub £500 hardtails, high end MTBs, gravel and road as well as general Christmas goodies. Our more well-heeled customers are confident after the election it is okay to spend money on bikes and that hasn’t seemed to stop as we roll into January.

“We grabbed some footfall with a chalkboard outside as parents pass the shop, as they drop the kids off at a tutoring company – “get them off devices” was the message. We also had some fun thanking customers who buy local with the usual Haribos let would get in their Wiggle or Chain Reaction boxes.”

David Tod from Take Charge Bikes says that October, November and December were definitely quieter than previous years: “December is typically a quieter month for us, e-bikes aren’t your typical Christmas gift. Saying this, last December 2018 was our busiest December ever I do think the general state of uncertainty leading up to the election and other global issues had made consumers cautious.

“The new year is returning to trend with good intentions bringing customers back into the shop and we’re seeing steady business.” And the weather may not necessarily be having a negative impact either: “Strangely we often have quieter days when it’s sunny than wet,” Tod continues. “I think people are generally out making the most of the weather. The best days for footfall are non-exceptional weather days.”

John Woods Cycle Repair centre describes winter as ‘great’, with trade nice and regular as everyone was getting kitted out for the darker, wetter weather: “We are keeping our fingers crossed the snow will hold off for the commuters out there. Wet weather always gives a cycle different challenges, that in a way benefit trade with the increase in sales for wet weather gear and lights. However, snow always slows up trade as it provides low footfall on the high street and slows distribution.

“Sales do change over Christmas for us. We don’t find that turnover changes drastically, but how the turnover is generated does. General sales and unessential maintenance does slow slightly but sales of Christmas gifts and kids bikes increase, almost canceling each other out. The challenge as always is forecasting for this change, preparing stock levels and planning workshop load.”

Dan Parson, director of operations, Fully Charged says winter has been ‘fantastic’ for the store, as it continues to go from strength to strength. “This winter has been no exception, with continued growth in interest and sales throughout, resulting in a dramatic improvement in numbers compared with the same period last year.

“Traditionally, wet weather does have an impact on footfall and test rides – but our analysis shows that this is linked more to wet weather than to the time of year. We have had some of our best sales figures on cold, bright winter’s days. Nothing that a loaner jacket and a good set of mudguards cannot help with though!”

Parson also explains how Fully Charged is closed from Christmas to New Year to give its e-bike experts some well-deserved downtimes and a chance to brush up on the new season’s products, whilst munching on mince pies in front of a good Christmas movie. “We do see a spike in online activity and web sales during this period as customers do the same.”