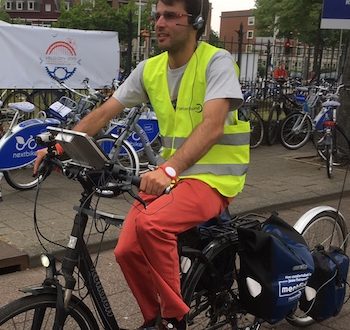 “How comfortable is your cycle path?” Meet the measuring bike

Thierry Jiménez cycles with headphones on a bike festooned with cameras and other monitoring equipment, and he rides with a trailer that can measure the width, smoothness and all-round usefulness of cycle paths.  He works for Belgium’s Fietserbond, or "cyclists’ union", and is a full-time cycle-path comfort measurer.

“The data I capture while riding is used to determine which routes need urgent care,” he told me while we rode together on the cycle superhighway between Arnhem and Nijmegen in the Netherlands. If he had been measuring that particular route he would plotted that it was wide, well demarcated and was sited some distance from motor vehicles. Importantly, he would have also captured hard data on the route’s asphalt loveliness.

Not everywhere in the Netherlands has new cycleways built to this high standard, and Belgium has far fewer. But by using the measuring bike – or "meetfiets" – it’s possible to log data that can be used to push for such world-class cycleways.

"It can be hard for local politicians to understand why a bumpy cycle path isn’t liked and doesn’t get used," Jiménez told me, "but when we show them a graph of the bumpiness, next to a graph of the smooth road next to it, it’s a light-bulb moment for them. It then becomes easier to push for high-quality infrastructure."

Fietserbond of the Netherlands also has a measuring bike, but the Belgian one is more advanced, can measure a greater variety of parameters, and has been constantly improved since Jiménez joined Fietserbond in 2014. (He has an academic background in mobility sciences, and along with Bruno Coessens, is part of a two-man "vélo-mesureur" team at the Brussels-based organisation.)

Originally conceived as a tool for Fietserbond alone the meetsfiet is now hired in by municipalities – the dense data it can provide is used to improve not just the width of cycleways but also their surfaces.

"Comfort is a more important indicator of cycle-friendliness than many people imagine," said Jiménez.

I was riding with him, and others from Belgium’s Fietserbond, because we were all delegates at the Velo-city conference recently staged in the Netherlands. I talked to Jiménez at length during the conference and you can hear the interview on the latest Spokesmen Cycling podcast. Slides from the presentation Jiménez gave at Velo-city can also be found at that link.

The Spokesmen Cycling podcast – which is also available on iTunes – airs every fortnight and has been produced since 2006.