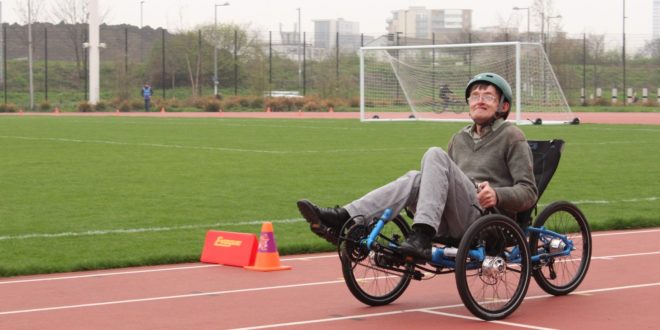 How can we go about removing barriers to cycling?

A survey, carried out by disabled cycling charity Wheels for Wellbeing, found inaccessible cycle infrastructure, cost of non-standard cycles and not being allowed to cycle in places a mobility scooter would be permitted, are three major issues disabled cyclists face.

While the survey found cycling was easier than walking for 75 per cent of disabled cyclists, many disabled people don’t realise they can cycle, and Wheels for Wellbeing sees the industry playing a role in, and benefiting from, growing a new market. There are 11.5 million disabled people in England, according to one estimate, a number that is set to grow as the population ages. Isabelle Clement, director of Wheels for Wellbeing, tells BikeBiz: “There is definitely a segment of the market the industry isn’t reaching. The industry, in general, could really help by adding variety to how they represent cyclists in imagery. If you only have pictures in your marketing material of young, fit males with a racing feel, then you’re part of the problem, because you’re putting off a whole load of people.”

The second survey of its kind done by the charity, it found that out of 202 disabled cyclists, 84 per cent rode for fun, 81 per cent for exercise and 24 per cent to commute. Nearly three quarters – 72 per cent – of disabled cyclists use their cycles as mobility aids. The most common type of bike is the standard two-wheeler, with one in five disabled cyclists owning a cycle with electrical assist.

Clement, who uses a wheelchair herself, didn’t realise until her early 30s she could convert it to a hand cycle. The adaptation enables her to be more independent and less reliant on expensive taxis. She says bike shops could help promote disabled cycling by having information about local disabled cycling groups, as well as adaptations that can help more people cycle.

She says: “People tell me they went into a cycle shop and they just said they couldn’t help. Sometimes it’s as easy as knowing about simple adaptations, such as single-handed double brakes, toe straps or different cranks.

“It’s knowing people can cycle with impairments, training their staff and pointing people to use our website or cycling projects. It just requires a bit of knowledge, a retailer who isn’t looking at them with square eyes but knows where to look or will do a bit of Googling.”

The survey found 36 per cent of disabled cyclists were unable to afford a non-standard cycle, which can cost significantly more than standard cycles. The Green Commute Initiative is a cycle to work scheme equivalent, only without the £1,000 upper limit, that employers can sign up to, free of charge. Customers can buy any kind of bike, electric or otherwise, or specialised or cargo cycles, under the scheme, with registered bike shops.

The survey also found almost half of disabled cyclists feared benefits sanctions for being seen as ‘too active’, meaning people are missing out on being physically active because people think cyclists are necessarily able-bodied. Wheels for Wellbeing states that several respondents reported negative views from the public, including being challenged that ‘anyone fit enough to cycle can’t be disabled’.

37 per cent of disabled cyclists had encountered abuse or disability hate crime while cycling, while many cyclists were asked to dismount in pedestrianised areas and even parks, because people didn’t understand they were using their cycle as a mobility aid.

Barriers on cycle infrastructure, such as gates and anti-motorbike chicanes, can stop disabled cyclists getting through on non-standard cycles, or if they are unable to
lift their cycles or dismount. Inadequate parking was also found to be an issue for disabled people cycling.

Beyond the bicycle
Clement says the industry could see benefits by looking beyond the bicycle, whether to the trike and recumbent trike market, to cargo bikes for families and businesses. “We want the industry, in general, to open up their minds to more than just the standard two wheeler; there’s a much broader market for them to engage with,” says Clement. The Beyond the Bicycle coalition is made up of disabled cyclists, families and traders who use non-standard cycles, like cargo bikes. Its aim is to highlight the needs of those groups which, when combined, represent a significant market, says Clement.

“We all have very similar issues in terms of the need for infrastructure which works for our types of cycles, two-wheelers included,” she says. “We all have cycles which are bigger, more expensive and harder to park, which makes it much more important to park them securely because they are more likely to be stolen. “People who say it’s a tiny segment of the market, any of them are small certainly, but if you put all the disabled and older people together, the families and the small and large traders using cargo bikes too, it’s huge. With Government providing subsidies for e-cargo bikes, that market’s going to start growing.”

She says bike shops can help encourage people having families to consider buying cargo bikes, to use instead of cars for some trips, and knowing about how to repair those non-standard cycles.

Case studies
John, 59, has cerebral palsy which means he struggles to walk. Learning to ride a bike aged six changed his life, allowing him to be independent. For John, as with around 72 per cent of the disabled cyclists Wheels for Wellbeing surveyed, cycling is easier than walking. It is a non-weight bearing activity that he can do with his condition.

He says: “I can’t put into words how it feels to get onto your bike, on a cold crisp November morning, you know when there’s a sheen on the road and the sun is just
breaking through? You can see your breath, and you feel your body, and you just cycle and it’s like meditation, all the cares in you go away, and the whole world opens up in front of you, and you feel you’re alive.”

However, his neighbour started taking photos of him, and he worried he would lose his benefits if he was seen as ‘too active’, so he stopped cycling. John was devastated: “Cycling to me is just as important as the day I fell in love. It has been such a big part of my life, and it has been wrenched away from me.”

Wolf Simpson lives in Colchester and is building himself a ‘cruiser style’ e-bike to reduce pressure on his knees. He has a condition that causes leg pain, and cycling helped him walk again after using walking sticks for 20 years.

He says: “It was a physio that worked it out. I was doing rehabilitation, using those pedal machines and every time I was on them I managed to walk better off them.” Since then, he cycles regularly: “Cycling has helped me keep walking; if I haven’t cycled for a couple of weeks my legs hurt me, I find it harder to walk and quite often I’m back on my sticks.”

He agrees there is a lack of understanding about who can cycle: “People say ‘if you can cycle you can walk’, but no, they are two different things.” He hopes, once he has built his e-bike, he can cycle the 22-mile trip to work four days per week, in part because it’s quicker than the bus.

Natalie Wilson has a rare condition called Ehlers-Danlos syndrome, which affects her connective tissue. Five years ago she couldn’t walk to the shops, then she started using a recumbent trike. She says: “Everything in my body is affected, brain, heart, lungs, stomach. My shoulders used to dislocate just rolling over in bed.

“I first started using my trike in a neck brace. It was an amazing feeling being outdoors, getting around under my own steam. It has built up my muscles, which support the connective tissue, I have still got everything underlying that, still take 20 tablets a day, but because my muscles are so strong I’m not having so many underlying issues.”

Cycling has changed Natalie’s life and in 2018 she cycled the entire coast of the UK on her recumbent tricycle in 14 weeks. Now she works full time at the Ehlers-Danlos syndrome charity, encouraging people with her condition to cycle, and helping them access relevant services. Natalie would like to see more sportives permit disabled riders and for non-standard cycles to be more readily available. 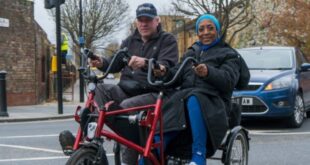 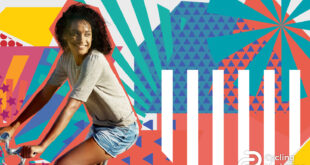