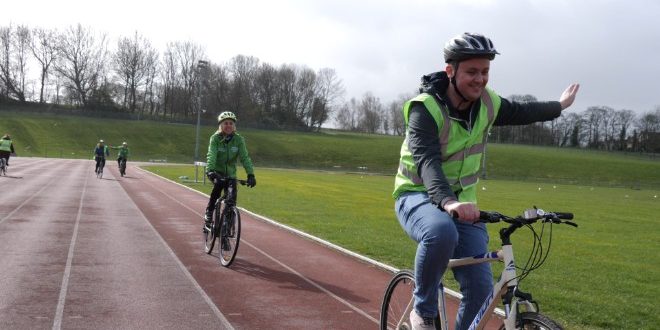 What are the mental health benefits of cycling?

There are many benefits of cycling, whether it’s for commuting, as a hobby or sport. The Cycle for Health scheme, now in its fourth year of delivery, aims to boost mental health.

More than 1,000 people have now taken part in the referral scheme across West Yorkshire after being prescribed cycling by health care professionals. The scheme is aimed at tackling health inequalities by offering people with long-term conditions a 12-week programme of cycle skills training.

“For the first 18 months, it was more of a physical health impact,” says Tom Murray, Cycling UK senior project officer. “It was about them becoming more active as a person and changing their behaviour rather than necessarily making cyclists. Obviously, as a cycling charity, we hoped that would happen anyway.

“But once we started up the first year, we got in touch with quite a lot of mental health organisations. We liked the idea of it because cycling is quite unique in the sense that you can get outdoors, you’re out in the environment and you can go from place to place.

“From a mental health point of view, a lot of professionals picked up on it and thought this is something that could have a really big impact. It was 18 months in that it suddenly took this switch to develop the mental health side and that’s when we linked with charities like Macmillan Cancer Support. The real game-changer was in year three, we then linked with the NHS.”

So how does cycling benefit mental health?

“To understand it, we used the Warwick-Edinburgh scale, which gives people a score,” explains Murray. “When they come onto the project, a typical question is: ‘How confident do you feel at the minute?’ or ‘How capable of making a decision are you?’ We ask that again at week 12 and week 18.”

Murray continues: “One of the other key questions is: ‘How do you feel around others?’ A lot of people that are coming along have just fallen out of that social world. They’re closed off, they’ve had something that’s knocked their confidence. They’re spending a lot of time at home and that’s just exasperated the problems.”

The scheme is delivered by the national cycling charity Cycling UK, in partnership with the West Yorkshire Combined Authority’s CityConnect programme, which encourages more people to travel by bike and on foot.

Among those who have benefitted is Dan (pictured), who’s 31 and from Featherstone, near Wakefield, developed depression and anxiety after suffering a bereavement. He said: “You might have a bad week and you’ve had this to look forward to, and you’d come here and you might feel a little bit low, feel a bit tired, a bit drained but you’d leave it feeling invigorated and energetic. You might be a little bit sore but it’s a very positive thing.”

“I think it is just pushing that point for us about the benefits of being outdoors,” Murray adds. “This is an activity that is not weight-bearing, if they’ve been injured in a different sport or activity typically they can still get hold of a bike. It doesn’t require them to have a background in cycling.”

He says there’s a community aspect too, by getting to know the people you ride with. “Some will end up riding 100 miles on a Sunday, but for some people, just to ride that bike in the company of others for two hours is massive.”

Cycleplan has created an interactive guide which explores how cycling can impact the whole body, from the brain down to the legs, with benefits including improved mental wellbeing, a boost in creativity, improved sleep, improved lung health and a lower risk of heart disease.