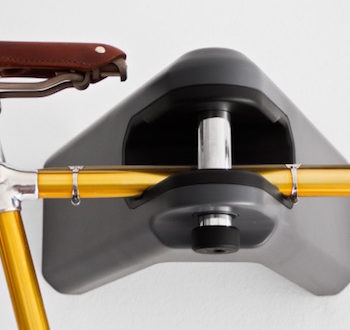 Hiplok has raised £80,399 in pledges from 318 backers on Kickstarter for its Airlok wall-hanger, and the bike storage and security device will now go into production. The funding goal had been £70,000. The campaign ended earlier today.

Kickstarter backers will get the product in early 2017 with sales to bike stores starting soon thereafter.

The device is currently on display on the Zyro-Fisher stand at the Cycle Show at the Birmingham NEC.

Hiplok co-founder, Ben Smith, said: “We have been overwhelmed by the reaction from the hundreds of Kickstarter backers who have supported us in putting Hiplok’s first secure bike storage in to production. It’s fitting that the final day of our Kickstarter campaign coincides with the start of the Cycle Show."