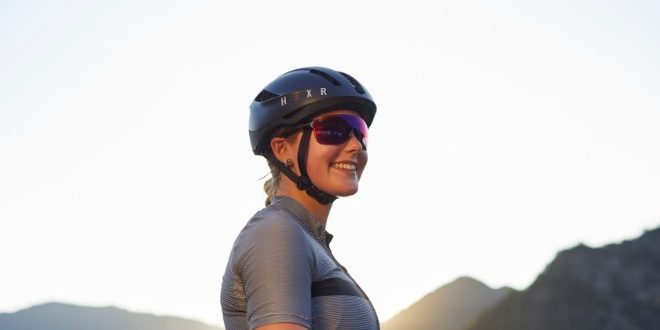 Rebecca Morley speaks to Jamie Cook, co-founder of Hexr, about 3D printing helmets and what it could mean to the industry

Innovation is important within any industry, as is recognising it. BikeBiz‘s very own Innovation from a Newcomer Award aims to do just this, focusing on brands and companies that have launched a product demonstrating groundbreaking design and R&D.

This is something Hexr has done with its cycling helmet. It is the first 3D-printed, custom helmet built on a honeycomb hexagonal layer instead of traditional foam. This, says Hexr, allows it to bring a level of customisation and personalisation ‘never seen before’ to deliver breakthrough safety, fit and performance. In fact, Hexr believes it could ‘change the industry forever’.

Following six months of rigorous safety testing and design, it is now shipping to customers.

“About six years ago I was at UCL doing my mechanical engineering undergraduate degree, and in my final year I had this opportunity to create a 3D printed bicycle helmet,” co-founder Jamie Cook explains.

“I started designing different types of structures. Honeycomb structures have the highest crush strength to weight ratio, so that was a really good starting point, but honeycomb is normally made on a flat surface. Making it on a curved surface is, from a manufacturing perspective, really hard.

“So what 3D printing allows, because of the freedom of design, is complete geometric freedom. It allows you to create these curved honeycomb structures. So I thought: ‘That’s a wonderful application of 3D printing.’”  Cook, seeing the technology’s potential in making helmets safer, persisted despite the considerable costs involved. When the helmets were tested in a basement lab at UCL, they were found to be just as effective – and in some cases more so – than foam. 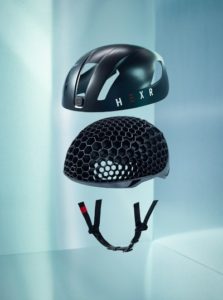 Over the past six years, Hexr believes it has gained a comprehensive understanding of how a poor fit can undermine the effectiveness of cycling helmets.

Safety first
Not only does the new Hexr helmet surpass all current safety standard tests, but additional testing has shown improvements on rival designs, including those equipped with MIPS. The current safety standards are designed to mimic actual head impacts by dropping a head-form with a helmet with a certain velocity onto an anvil.

The maximum deceleration is measured and must be below the standard’s limit, which is typically 250g-300g. The Hexr comes in at 144g.

Despite easily exceeding the existing requirements, Cook and his team have sought independent validation of Hexr’s technology, believing that current basic safety standards do not reflect real-world cycling.

Further testing from the University of Strasbourg and Professor Rémy Willinger, a global authority on helmet impact testing, who developed the test used by MIPS, showed that Hexr accomplished the best aggregate score from a total of 32 helmets tested – a 26% improvement on other helmets in the safety test.

Custom fit
Another advantage of Hexr’s 3D scanning software is that it delivers a precise fit for each customer. Having identified a typical fit tolerance of around 2cm in several traditional foam-lined helmets, Cook teamed up with co-founder Henry Neilson to develop the 3D scanning platform from which each Hexr helmet is built. Since its foundation in 2018, Hexr has studied over 3,200 cyclists to ensure that its process offers the perfect helmet fit for all riders.

In addition to Hexr’s focus on fit, comfort and safety, the helmet also boasts exceptional performance credentials. Its outer shell is sculpted with insight from TotalSim, British Cycling’s aerodynamics partner for the 2008 and 2012 Olympic Games. At an output of 200 watts, a 40km time trial will be completed seven seconds faster in a Hexr helmet than in a Giro Aether or Kask Protone.

Its commitment to the delivery of a tailored and premium offer does end with the helmet and is woven throughout the fitting and buying experience. The company will send out an iPad loaded with the company’s bespoke, 3D scanning software to a customer anywhere in Europe. Once the data is received, the helmet is 3D printed from the digital mould, each one unique.

It also features a removable, washable padding and an optional ratchet system. The ratchet can be dialled up to tighten the helmet against the head, or simply removed. The Hexr helmet also offers ventilation, ensuring a constant flow of cool air.

For riders wishing to make their helmet one of a kind, Hexr offers optional custom engraving, an inbuilt sunglasses holder, and a removable lid that can be swapped out for alternative designs, in partnership with custom cycling company WyndyMilla and its studio WM Paintworks. 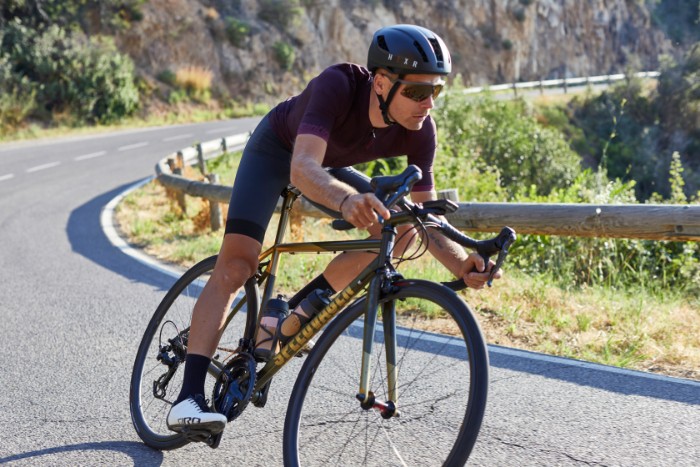 Building up the hype
The helmet was officially launched earlier this year and is already shipping to customers.

“The helmet is also interchangeable, so you can replace the shell, the padding or the chin-straps. The shell itself can have multiple different colours, it should be a helmet that can last winter, summer, and you can customise it for your bike.”

And Cook says the reaction has been largely positive too. “We’re really happy with the product and it has taken a long time, it’s taken about five to six years in total. 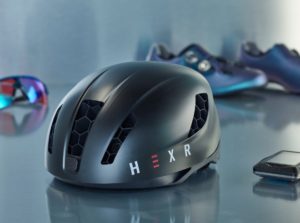 “Now we’re about to really start pushing it and we’re excited to get it out to customers. We’ve just started shipping our first 300 helmets and already we’ve had some wonderful reviews about it.”

But given how many helmets are already out there, it can be a tough market to enter. So how can newcomers stand out and persuade consumers to try out the new technology?

“We’re building up the hype and the buzz,” Cook says. “We only started shipping about a few weeks ago, so to have a lot of interest and buzz already about what we’re doing is brilliant.

“In terms of entering the market, the interesting thing about cyclists is that they are probably two things.

“One is that they’re quite picky about what they like and don’t like, and the other is the vanity of cyclists, which is quite high as well.

“We’re figuring out how to fit within that market in particular, but we do see ourselves really as a technology company that’s trying to innovate helmets and head protection and we want to see our technology applied, not only in cycling but to alpine, equestrian or motorcycling.

“This is a journey for us, but we’re excited to be able to offer multiple coloured shells in the future, which will allow people not only to have something that fits perfectly but also to be able to customise it, so it becomes more of a personal product.”

So now that this product is out, what does the future hold?

“It’s tough because with 3D scanning and 3D printing, and the science and the patterns, there’s so much opportunity to go and take on,” Cook says. “There are loads of other markets, but we have to be focused on figuring out what works for one market and try and create a viable business. 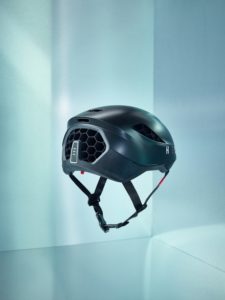 “I think we’re really happy with our final product, and now it’s just about us figuring out what works and making sure we’re delivering the best customer experience when you buy a helmet, and also the product quality is through the roof in terms of comparison with other foam helmets.

“It’s a really exciting space that we’re entering and the fact that we can offer limited editions and coloured shells means that there’s more opportunity to have new design iterations come out that I think will be fun and personal.”

Cook says that from a technology perspective, this could represent a step-change in 3D printing in terms of speed, quality and performance.

“We also see 3D scanning becoming super accessible, so not only on an iPad, which is what we do right now, but becoming accessible through your smartphone.

“The technology is making it accessible and we want this to be a product that is right for the majority of the market. It’s a high price point, but we believe you’re getting more helmets in one, but also can see our performance and accessibility improving.

“It’s quite a British innovation, but hopefully a global product.”

Previous Why is it important to get elderly people more active?
Next Peaty’s Products collaborates with Chris King to launch new colourways of tubeless valves

In the first of a five-part series, The Association of Cycle Traders (ACT), the largest cycle trade organisation in the UK, helps retailers boost their business. This month, a look at how the cost of living crisis will nudge more consumers towards cycling