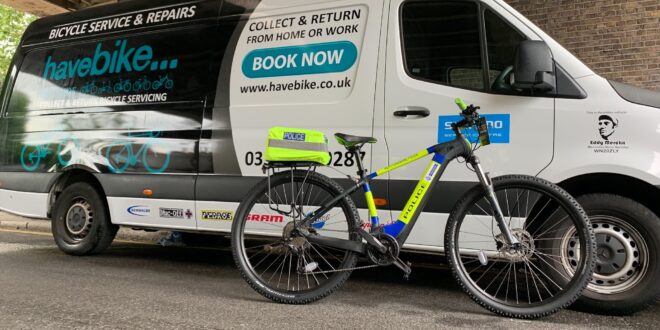 havebike has delivered five purpose-built e-bikes to the Hertsmere Safer Neighbourhood Team in the Hertfordshire Constabulary.

The Safer Neighbourhood team, whose responsibilities include addressing short and long-term neighbourhood issues, identified a need for the e-bikes due to their cost-effectiveness, environmental benefits, and convenience. Officers have already reported being able to spend less time travelling to the areas they patrol on their ‘beat’ and wide interest in the bikes from people in the community.

Funded through contributions from developers secured by Hertsmere Borough Council, this is the third set of e-bikes that havebike have delivered in three years, a sign of how useful they are to the constabulary.

This comes as havebike is currently undergoing a first round of public investment as it begins expansion across the UK following years of rapid growth and fuelled by the recent surge of everyday cyclists. Hosted on the platform Seedrs, havebike has now reached 108% of their target, with five days to go.

havebike CEO Nick Brown said: “We’re delighted to have purpose-built and delivered another five e-bikes for Hertfordshire Constabulary, having worked with them for the last three years. E-bikes are perfect for the role the teams play on patrol in their communities, and it’s great to hear that officers are enjoying the benefits of them already.

“By incorporating bikes and e-bikes into their fleets, Hertfordshire Constabulary are setting a great example on how versatile bikes can be, and the impact they have in reducing congestion, and improving air quality.”