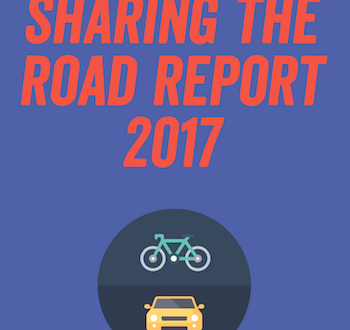 However, the survey has been criticised by motoring and cycling groups. AA president Edmund King told BikeBiz: “The AA believes that the introduction of number plates for cyclists would be impractical and unnecessary – police already have the powers to stop cyclists.”

Cycling UK’s head of campaigns and advocacy Duncan Dollimore said: “[The] government has consistently reached the conclusion that such proposals are disproportionate and unnecessary.” And British Cycling’s policy advisor Chris Boardman said: "No country in the world requires bicycles to be registered because it does not serve the public interest – it would be hugely expensive and drastically cut the number of people who cycle."

The number plate proposal from one of the leading UK retailers of motor-vehicle number plates is included in a press release that has been teased out to the mainstream media over the last couple of days. (The embargo ended one minute ago.) It’s possible that the press release will result in some negative coverage for cycling, especially following the recent blanket media coverage given to Matthew Briggs’ campaign to incorporate death and serious injury cycling offences into the Road Traffic Act.

The online survey of 2,042 adults was carried out in August by YouGov and has led to the production of “Sharing the Road”, a 20-page infographic-heavy report produced for Halfords by its external PR company. The document has a foreword by the retailer’s chief customer officer Karen Bellairs, who said “we wanted to examine whether there was a genuine willingness among cyclists and motorists to share the road.”

The survey asked whether cyclists should have to take proficiency tests before being allowed to cycle on the public highway, and also asked whether motorists should be required to ride bicycles as part of the driving test. (The answers, respectively, were 50 percent and 18 percent in favour.) Respondents were also asked whether penalties should be increased for cyclists “who don’t abide by the Highway Code” and ditto for motorists who “drove aggressively near cyclists.” (86 percent and 80 percent respectively.)

While Halfords may claim that it is not itself advocating for cyclists to be forced to carry number plates, or for sanctions against cyclists to be increased, it’s clear that they were the questions put to respondents by YouGov, and provided to them by Z PR of London on behalf of Halfords.

“What our new research makes very clear is that the car is still the nation’s favourite means of getting around,” said Bellairs, adding that “there is massive support among motorists for better training, more cycle lanes and improved facilities for cyclists.” (45 percent of survey respondents said there ought to be “dedicated cycle lanes on all roads”.)

Bellairs also claimed that the survey showed, with no evidence provided other than the online questioning, that there was a “genuine willingness” from Britain’s motorists to “share the road.” She said that this is something that “Halfords, which champions motoring as well as cycling, is very keen to foster.”

The Sharing the Road report advises cyclists to “be a peacock” and to “always make sure you’re wearing bright clothing when cycling, whether it’s a high vis jacket or a high vis vest” but it does not contain similar advice for motorists (Halfords missed a trick here, it could have suggested motorists buy its spray-cans of yellow paint so they can make their cars more conspicuous).

The Halfords press release – which is headlined "Britons back tougher penalities for people who cycle aggressively but drivers and cyclists want to work better together" – states that “65% agree that cyclists should be required to wear reflective clothing, to give them the best chance of being seen.”

Required? As in forced? That won’t endear the company to many cycling customers.

There was no survey result – or, presumably, any question – about the compulsory wearing of helmets for everyday journeys, either for cyclists or motorists. However, there were questions and answers about cycle servicing. A perhaps surprising 48 percent of those asked said they could mend cycle punctures. And, in what will be news to independent bike shops, 43 percent of Brits can “tighten a loose chain”; 37 percent “know how to adjust their own brakes”; and 31 percent “can clean their gear mechanisms.” (Those answers should make one wary of all the others.)

The report goes on to claim that an “overwhelming 93% think it would be beneficial for all education on road safety to be aimed at cyclists and motorists,” as if it isn’t already.

Responding to the Halfords report, the AA president told BikeBiz:

“Most cyclists are drivers and many drivers are cyclists so we need to live in harmony with each other. Rather than harsher penalties all round, we believe it is preferable to promote better training, infrastructure and positive attitudes."

King said he didn’t believe there was a requirement for harsher penalties for law-breaking cyclists:

“There are already penalties in place for cyclists who don’t abide by the Highway Code and we believe that targeted enforcement alongside education courses are a more effective way of making our roads safer.”

The AA president added that existing laws need to be enforced first.

“We would prefer to see targeted police enforcement through schemes such as Operation Safe Pass whereby the police target dangerous drivers [who pass too closely to cyclists],” said King.

While careful not to criticise Halfords directly (the retailer and Cycling UK partnered for a project earlier this year) Dollimore was critical of the report’s timing: “Given the uneven tone of the current debate on cycling, it was perhaps optimistic to expect this survey would be a constructive addition to the discussion.”

He added: “We already knew some people instinctively think regulation and testing of cyclists is the answer. Those people frequently fail to appreciate the practicalities of imposing and enforcing regulations on children, the costs involved, or the public health and other implications of putting up further barriers to cycling. Fortunately government has consistently reached the conclusion that such proposals are disproportionate and unnecessary.

“Ultimately, there are opinions expressed in this survey which we agree with, and others we don’t, but the truth is this is merely a summary of what people said in response to a series of questions. It’s far better, when suggesting a need for change, to assess the arguments for and against, and this is precisely the point we will make to government as it considers its forthcoming cycle safety review."

Boardman said "compulsory proficiency tests and number plates, are quite obviously non-starters and cannot be regarded as a serious contribution to the public debate on road safety."

He added: "The reality is that [British Cycling], and other cycling organisations, already work with groups representing pedestrians and motorists to find ways to make our streets safer for everyone. Indeed Halfords themselves are part of our #ChooseCycling Network of British businesses that strongly believe more cycling is crucial to help business thrive, to encourage people to live healthier lives and to make Britain a greener, less congested and more pleasant place to live."

Boardman – who has an eponymously named brand stocked by Halfords – stressed that "laws should be developed using evidence, focusing proportionately on those with the ability to cause most harm. Around 1,800 people die on British roads annually and more than 99 percent involve collisions with motor vehicles."