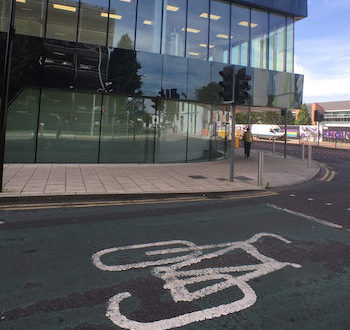 Graphene: born in Manchester and taking on the world

There are plenty of strong claims being made for the use of graphene in the bike industry but, to date, only Vittoria, Catlike and Dassi have graphene-linked products on the market.

Catlike uses graphene in its high-end Mixino helmet. Vittoria’s 2017 tyre range is again majoring on the inclusion of graphene in its list of ingredients. Vittoria claims that adding a one-atom-thick layer of graphene allows its tyres to remain hard on the straights but soften during braking or cornering. The Graphene+ tyres are also longer-lasting and more puncture resistant, says the Italian company, and they dissipate heat more efficiently. Other companies are not so convinced: the head development at Continental, Christian Wurmbäck, told Cycling Weekly that a Carbon Black is better than graphene in tyre manufacturing. And plenty of trade folks scoffed when Dassi of the UK said it was making a composite frame with graphene. Not the whole thing, of course, just one percent, but it’s an important one percent, believes Dassi.

Launched at Dassi’s HQ in Hartley Wintney in Hampshire, the graphene-enriched frame weighs 750g, but Dassi claims that this could be nearly halved by increased use of the wonder material. (The frame has an outside layer of carbon fibre, and six layers of graphene composite within.)

Dassi CEO and founder Stuart Abbot (a former Rolls Royce aerospace design engineer) said that a frame made with graphene could be reduced by a further 200 grams. He also plans to make graphene-enriched stems, seatposts, and seatclamps. Likewise, Vittoria adds graphene to the carbon fibre in its wheel rims.

It’s not very well known that graphene was first isolated at Manchester University, and the city of Manchester aims to capitalise on its connection with the National Graphene Institute which is based in a futuristic new building just off Oxford Road, one of Manchester’s key thoroughfares, and which is currently being dug up for the installation of protected cycleways.

The material was isolated – using Sellotape … really, really – by two Manchester University physicists, Andre Geim and Kostya Novoselov: winning them the 2010 Nobel prize for physics (and knighthoods). “Usually when you make materials thinner and thinner, their properties deteriorate,” said Sir Andre. “But with graphene we found things only got better.”

Graphene been hailed as the strongest and most conductive material in the world, with a huge range of electronic and medical appplications.

The university’s National Graphene Institute was opened last year, and it researches how the super-thin substance, popularly isolated from a smudge of pencil lead, can be commercialised. The building was funded by the UK Government with £38m, and received £23m from the European Union’s European Regional Development Fund (don’t mention Brexit to a graphene scientist in Manchester; the university gets £1m from the EU for its graphene research). The institute operates on the ‘hub and spoke’ model, working with other UK institutions involved in graphene research.

Sporting goods companies were among the first to make graphene-enhanced products – aside from bike frames and tyres, there are graphene-enriched tennis rackets from Head.

While we’ll never see a full frame made from graphene, it’s likely we’ll see more wheels and wheel brake tracks using the material, specifically because of its heat-dissipation properties.

Graphene is also a superlative electrical conductor and could be used to in electronic drivetrains, power meters, computers, and lights.

The Korea Electrotechnology Research Institute has used 3D printing to produce straight graphene oxide nanowires and woven structures, Shinshu University in Japan and Penn State in the USA have developed a way to produce a graphene oxide yarns.

Vittoria has been working with graphene for nearly six years, in association with Directa Plus, a graphene factory. Directa Plus supplies graphene to Vittoria as three-to-seven-atoms thick “nano-platelets”.

A Qurano wheel made with graphene, says Vittoria, has 50 percent more lateral stiffness, 10 percent better heat dissipation, 18 percent more impact strength and yet is 15 percent lighter. Vittoria is an investor in Directa Plu, which was founded in 2005 and is based in Italy.

“Graphene can improve the mechanical properties of a composite, as it can share the strain when added to the epoxy resin matrix and make it stiffer,” said Paul Wiper, a National Graphene Institute research associate. “But you have to get the balance right. A lot of graphene, say 10 or 20 percent of the matrix, would make it really stiff but it would also be brittle.”

For 2017 Vittoria is expanding its line of G+ graphene-enriched products, including a new triathlon tire and the new Pista series of track tyres. A new all-round Rubino Pro tubular version will also be available, and Vittoria is also producing a graphene-enhanced tyre for e-bikes.

The new Adventure Tech, Trail Tech, Randonneur Tech and Revolution Tech e-bike tyres all feature G+ Isotech compounds as well as ]puncture protection technology, and offer regulatory compliance for use with e-bikes. They retail for €29.95.

Vittoria is also introducing two new products in its Downhill product range. The Martello and Mota feature an a dual-ply reinforced casing with a rigid tubeless-ready bead and APF (Anti Pinch-Flat) insert. Both feature 4C and Graphene technology. Available in 26×2.5 and 27.5×2.5, with RTNT G+ technology, from 1380g, and with a retail of €59.95. The Gato G+ MTB tyre has been redesigned for MY 2017. Gato G+ is now a fast-rolling wet conditions XC race tyre. The G+ Isotech compound and the round profile are said to ensure even cornering transitions.

“The introduction of graphene allows for natural material barriers of rubber to be removed,” claims Vittoria, “which means that there is no longer the need for compromises between speed, grip, durability and puncture resistance.”