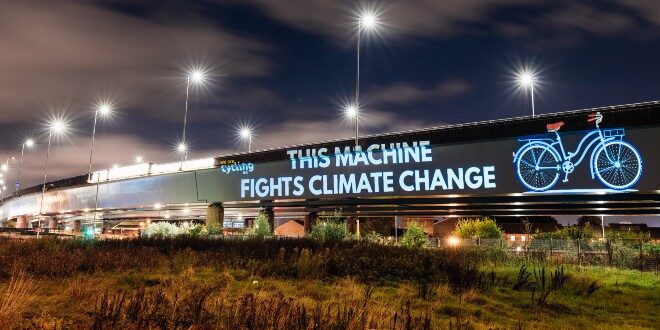 Some of Glasgow’s most iconic buildings and structures have been lit up with light projections to highlight cycling’s role in fighting climate change.

Cycling UK coordinated the projections to call on political leaders across the UK to invest in cycling in the run-up to the COP26 UN climate conference being hosted in Glasgow from 31st October to 12th November.

The messages were beamed onto the Barras Market, People’s Palace, Kingston Bridge, Glasgow Green arch and the side of the M74 on 19th October.

Domestic transport accounts for 27% of the UK’s greenhouse gas emissions. The projections highlight that investment in cycling and other modes of active travel is key to decarbonising transport and tackling climate change. Cycling UK is also calling on cyclists to ‘Pedal on COP’ on 6th November by taking part in feeder rides into Glasgow and joining the cycling bloc at the peaceful mass march. 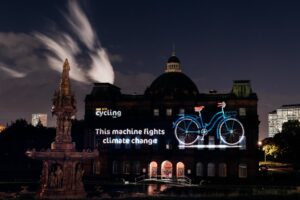 “This humble machine’s origins 182 years ago were just 70 miles from where the world’s leaders gather next week in Glasgow to decide the future of us all – its role in this fight should not be underestimated.

“Investment in cycling can help to save our planet, but time is running out. At the current rate of reduction, it would take 600 years to reduce the UK’s transport emissions to zero. Cycling can play a key role in decarbonising transport, but urgent action and investment is essential.”