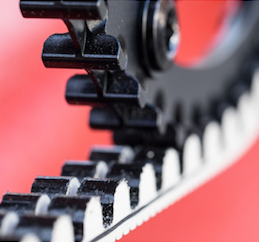 Gates celebrates the ten year anniversary of the Carbon Drive

Gates is celebrating the ten year anniversary of the first Carbon Drive. To commemorate the occasion, the brand is introducing various new products, including a limited edition white belt drive, at the 2017 Eurobike show.

Early prototypes of Gates belt drives were first seen at the 2007 show on a hard tail mountain bike. At Eurobike 2008, Gates again made gained attention when Fixie Inc and Gates won a Eurobike Gold award with the Five Star bicycle, a singlespeed with a Gates belt.

“Ten years ago, many people were skeptical that a belt drive could work on bikes. Now we have proven it not only works but that people want it, and for one simple reason: Gates Carbon Drive belts are a clean, strong, no-rust, no-stretch, low-maintenance alternative to chains,” said global director of Gates Todd Sellden. “Everyone loves bicycles and wants to ride more, but in modern life there are many barriers to getting on a bike. Maintenance is one of those barriers that we eliminate.”

“Our product line has expanded every year, with 15 belt lengths in our premium CDX line and six in our affordable CDN urban line, plus Carbon Drive Red and color options with blue or black fabric linings—a total of 32 belt options to meet all the most common OEM requirements,” commented Sellden. “In addition, we now offer sprockets in stainless steel, aluminum and reinforced composite – all engineered to interface with the leading internally geared hubs from Shimano, NuVinci, Rohloff and Sturmey-Archer, as well as with Pinion gearboxes and all of the leading electric bike systems from Bosch, Shimano STEPS, Bafang, Brose, MPF, Go SwissDrive and many more. We have worked incredibly hard over the past decade, and we are proud of the innovation we have brought to the bike industry.”