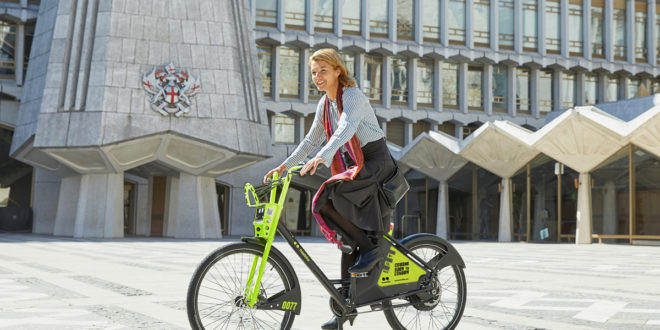 freebike to operate e-bike sharing services within the Square Mile

freebike has been selected by the City of London Corporation to operate electric bike sharing services within the Square Mile.

The pedal assist electric bikes are unlockable within seconds via the freebike app or by swiping a contactless card, and for less than 1p per minute, the rental can be paused if the user is at a meeting. The freebike’s electric motor also doubles up as an advanced locking system, allowing for smart, ‘ultra-fast’ rental, enforceable geofencing and protection against theft and vandalism.

The bikes will arrive in the City of London from the 12th June and can be rented as both a pedal or as an electric bike with no unlock fee. In order to encourage cycling, pedal mode can be used for free for the first ten minutes. While using the freebike in electric mode the journey costs £1 for ten minutes, with a smart pause mode allowing the user to park the bike temporarily before recommencing their journey. freebike will donate 2p for every mile ridden to the Lord Mayor’s appeal and will offer discounts to residents of the City of London.

Katharine Butler, co-founder of freebike, said: “We’re delighted to launch our first public freebike fleet in the UK and proud to be selected by the City of London Corporation to operate electric bike sharing in the City following a highly competitive bid. The electric freebike brings radical innovation in technology and approach and offers the public a fun, green, fast and healthy transport option around the City. We are passionate about getting more people cycling and out of their cars – electric bikes are a joy to ride.’”

Lance Uggla, CEO of IHS Markit who have a private scheme at its London HQ, said: “Our team have been using freebikes to get to meetings in London for the past eight months. They’re reliable, fun to use, save us a lot of time, but best of all they reduce our impact on the environment.”

This follows the news that Beryl has been announced as a bike share partner to help the City of London Corporation deliver on the dockless cycling elements of its transport strategy, launched at the 2019 London Cycling and Walking Conference.