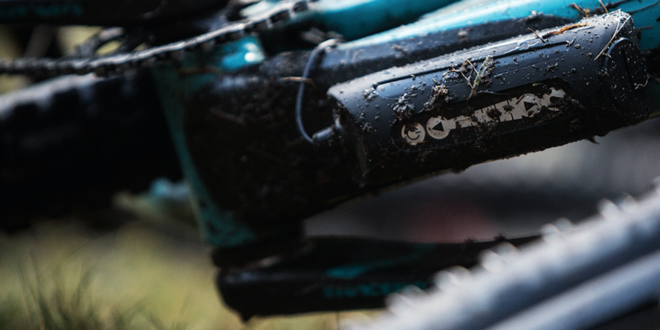 Flaér last week launched its chain performance system, Revo Terra, to the off-road market. It is now available through Flaér’s international network of distributors and retailers.

The Revo Terra is the world’s first chain performance system designed specifically for the MTB category.

During use, it applies Flaér’s specially developed Terra Fluid to the chain, allowing five per cent more power to be transferred to the wheel, making shifting smoother, and keeping the chain and cassette visibly cleaner, whilst eradicating chain suck. Terra Fluid has been designed to be continually re-applied via the Revo Terra system.

The unique non-stick formula means minimal dirt build up on the transmission and it keeps working at its most efficient all the time! Additionally Terra Fluid adds a protective layer to all transmission components and its special formula is washable with just water, making cleaning significantly easier.

The release comes after the Revo Terra won the MTB Product of the Year award at the International MTB Conference Awards in November. Although this game-changing chain performance system is only now coming to the off-road market, the Revo Via has been making waves in the road scene since its launch at Eurobike last year.

Chris Simpson, Flaér Technical Director said: “When we developed the chain performance system it soon became apparent from both the rider feedback and the extensive test data gathered that we would need to develop separate systems and fluids for off-road and road. The riding conditions can be so different, in particular for off-road, that we had to develop specific fluids and systems for each discipline. Our tests have shown that a Revo Terra really can make a significant difference to a drivetrains performance when cycling off-road.”

The Scottish company has made rapid progress in securing distribution partners in international markets with Flaér products now available in the UK & Ireland, Australia, New Zealand, Thailand, USA and Benelux. Flaér continues to seek partners in other territories – interested distributors should email nick.muddle@flaer.com; a list of Flaér stockists can be found on the Flaér website here.