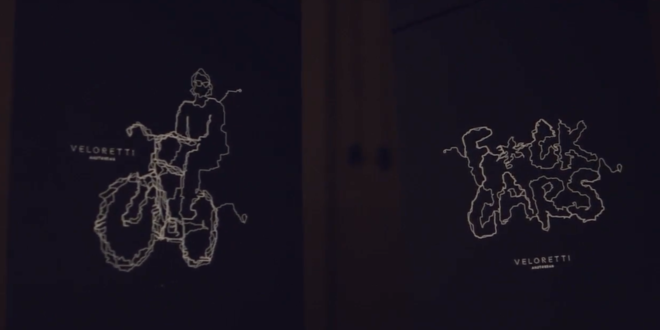 Dutch bike brand Veloretti has released a controversial video entitled based on a GPS-track of a ride around the streets of Amsterdam.

The film follows a hipster rider as he zig-zags around the city but it’s not until the end that it’s revealed that he has been taking a 77km-long route that, when traced on a map, spells out "F*ck cars".

The film – which uses a soundtrack track from the UK-based artist Rival Consoles – is part an online campaign "demonstrating once and for all that bicycles own the city," said Ferry Zonder, founder of Veloretti.

"We started Veloretti because we believe in cycling as the sustainable mode of transport for the future and hope to encourage people all over the world to take up cycling as an integral way to improve our environment and the way we interact with our urban landscape."

The film was directed by the ‘G-unit’. Guillaume Roukhomovsky and Gilles Suprin, from creative agency Anomaly Amsterdam.

Direct-to-consumer-brand Veloretti was founded in 2014.