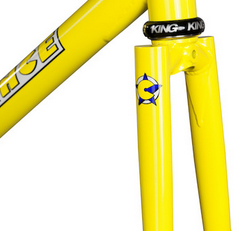 Fat Chance Bicycles has announced the re-release of the Yo Eddy! Road Fork.

First produced by the brand in 1995, the Yo Eddy! fork was the first segmented steel fork on the market, it has now been updated to modern standards and handmade by frame builder Chris Igleheart in Portland.

Igleheart has worked with Chris Chance, founder of Fat Chance since the company’s inception in the early 80s. Fat Chance re-launched in 2015 producing new versions of its historic line of bikes, reimagined for modern components and spec.

The Yo Eddy! Road Fork is a natural extension of the line, updated to accommodate a 1 1/18 steer with laser cut top caps and struts. The struts themselves are welded onto the Reynolds 853 fork blades. The Yo Eddy! Road Fork responds predictably in its resilience, steel has the ability to flex with road input while inspiring confident cornering and sprinting.

“Since relaunching Fat Chance, the Yo Eddy! Road Fork has been one of the most requested products. More riders are opting for bigger tire clearance and using their road bikes for more than just racing, and the fork speaks to those folks. It’s a durable, light and responsive fork, that just looks downright awesome,” said owner of Fat Chance Chris Chance.

“It’s been a pleasure working with Igleheart again. We have a great history and he has been making forks for my bikes for decades.”

Yo Eddy! Road Forks are available for purchase either on their own or with a Slim Chance Road Frame. The forks will be offered in black, as well as a variety of single color options.