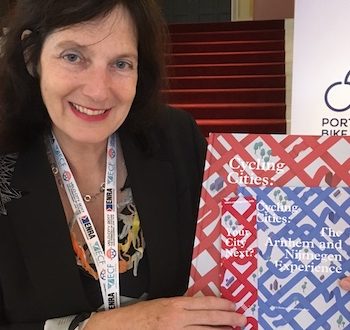 Every city was once a cycling city, says academic looking at your city

Dutch technology historian Ruth Oldenziel wants cities to rediscover their cycling cultures. "Almost every city once had a cycling culture," she told BikeBiz.

Oldenziel, an academic at Eindhoven University’s Foundation for the History of Technology, is one of the authors of "Cycling Cities" a tub-thumping coffee-table book about the waxing and waning of the cycling cultures in fourteen European cities. She wants this book to be a springboard to encourage cities around the world to explore their bicycling roots, and see how cities in the 1920s – and often through into the 1950s and 1960s – were often dense with people on bikes.

"What history shows," stresses Oldenziel, "is that political decisions were made to get the cities we have; a motor-dominated city is not inevitable.

"Every city could be as cycle-friendly as a Dutch city – Dutch cities have also had their ups and downs. But there’s no shortcut – there’s a lot of political work that’s required. You have to have the conversation: ‘what kind of kind do you want to have – a city where you only drive through? Or a city where you want to socialize, or shop?’"

Oldenziel recently co-authored ‘Cycling Cities: The Arnhem and Nijmegen Experience", a 64-page hard-back companion to the 256-page large-format "Cycling Cities", and she believes other cities around the world would benefit from commissioning their own books for what would become a series.

"My vision for the future is 100 books," she said. "It would be powerful to have a bookshelf of these books so we can see the stories of all these cities."

Cities interested in exploring their cycling histories would commission "Cycling Cities" to produce either a hardback book or a digital version.

"We have a general template where we ask the same questions," she added. "We analyse the urban form, the view of cycling in traffic, the role of social movements, and then look at the modal split over 100 years."

A number of global cities are in discussions with Oldenziel to be part of the series.