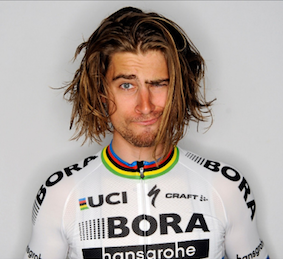 Cycling fans across the continent are being offered the chance to ask world champion cyclist Peter Sagan a question during the Tour de France thanks to an exclusive content partnership between Eurosport and the UCI rider.

The collaboration will see Sagan – who will be racing for the BORA Hansgrohe team at this year’s event – answering questions directly from fans during each day of Eurosport’s live Tour de France coverage. Questions will be curated from social media platforms with the most interesting that include the hashtag #AskSagan being selected by Sagan himself to answer on-air.

The rider has competed in the Tour de France on five occasions and won the points classification every time, the only rider in history to achieve this feat. The 2017 Tour will be Peter’s first with the BORA – Hansgrohe’ team; he will be looking to match Erik Zabel’s record of six maillot vert wins and add to his seven stage victories at the world’s biggest bike race.

Commenting on the initiative, Sagan said: "I’m delighted to partner with Eurosport for this project that will further connect fans and spectators with the great sport of cycling. Be creative, ask me your questions using the #AskSagan hashtag and I will reply to the best ones every day during the Tour de France."

Global head of cycling production at Eurosport Laurence Schirrecker-Mothes added: “Peter is the most recognisable and charismatic rider in the peloton; he truly transcends the sport, so we are delighted to be partnering with him. His success, style and fun-loving attitude has earned him a global fan base and we are thrilled that our viewers across Europe, and around the world via our digital platforms, will get the chance to put their questions to him during the Tour.”

The #AskSagan campaign will kick-off with an exclusive Facebook Live event on Thursday, June 29th, in Dusseldorf on the eve of the 104th Tour de France.