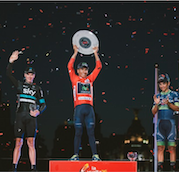 Endura has announced that its successful partnership with La Vuelta-winning Movistar Team will continue for 2017.

Quintana’s recent triumph at La Vuelta a España is his second Grand Tour victory after winning the Giro d’Italia in 2014. The Colombian achieved both victories in Endura clothing.

Endura’s founder and managing director Jim McFarlane offered his felicitations to Quintana and Movistar Team on another great victory – the 98th win achieved since their partnership began in 2014: "On behalf of everyone at Endura, I’d like to congratulate Nairo and Movistar Team on a special victory at La Vuelta.

"Areas throughout the company and collaborators such as Simon Smart at Drag2Zero, have worked tirelessly to bring important innovations to the kit that we make for the team in Scotland and by further extending our partnership with Abarca Sports we look forward to the demands of the UCI WorldTour’s leading team and riders driving Endura forward too".