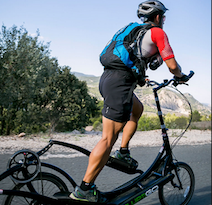 ElliptiGO, the prominent elliptical company, will end its crowdfunding campaign today after weeks of successful investment.

More than $1,000,000 has been invested in the successful brand by key investors, with an additional $200,000 in new investments generated through the crowdfunding portal. The campaign, which has been running for over two weeks, has raised a total of $500,000 via the platform StartEngine alone.

As the campaign ends today, ElliptiGO has announced that two new elliptical bikes will be released from tomorrow, Wednesday 1st. The new bikes will compliment the classic full-length bike and the Arc – a model which is specifically designed for shorter users.

ElliptiGO CEO Bryan Pate commented: “We’re thrilled with the support we have received from our investor team and the progress we’ve made over the past few years. With thousands of satisfied customers around the world, we believe we are creating the next big thing in exercise and recreation. We’d love for you to be a part of it.”

Last minute investments can be made via the link here: https://www.startengine.com/startup/elliptigo until the end of the day.