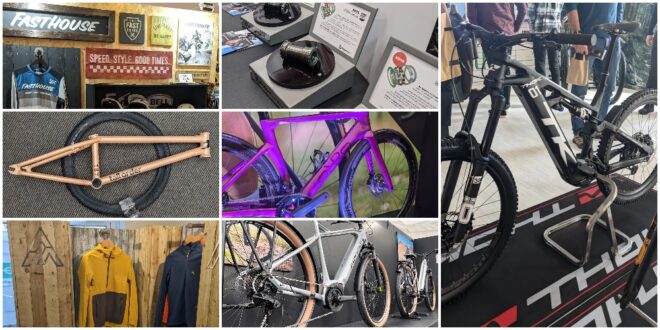 Our round-up of the most exciting products from COREbike 2022

BikeBiz editor Alex Ballinger gives his selection of the most exciting products on display, following his first edition of COREbike at the helm of the magazine.

After a long wait, the UK bike trade returned to the corridors of Whittlebury Hall on Sunday 20th March for COREbike 2022.

The BikeBiz team was once again on hand at the show to meet readers and to explore some of the hottest new developments in the cycle industry for this year.

Having scoured the stands over the three days of the show, I’ve picked out a few of my highlights, from the componentry, to apparel, and complete bikes.

(There were also plenty of new products that are currently not yet released for publication – we’ll bring you news on those as soon as we can).

E-bikes from Forme, Forestal, and Thok While the adoption of e-bikes has not yet sparked the transport revolution we’re all waiting for, it does feel as though the tides are turning in favour of power-assisted cycling, as more people turn away from the gas-guzzling expense of motor vehicles.

There was plenty on offer at COREbike for retailers wanting to capitalise on the impending e-bike revolution, whether it be utility, leisure, or the more extreme end of the off-road riding scale. 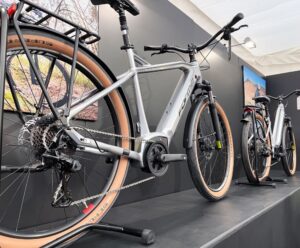 British-based bike builder Forme, distributed by Moore Large, had plenty on display in the e-bike department, but none more striking than the Peak Trail Pro E and ELS, which both scored plenty of attention during the show.

These brand new bikes offered versatility as both off-road trail machines and as utility-minded bikes that can be used for commutes and more, all with the assist of 65-mile range batteries.

Another significant development in the e-bike market has been improvements in e-MTB technology, as models are getting lighter, tougher, and more responsive, blurring the lines between pedal-powered trail bikes and the pulling power of an e-bike.

Both Thok (distributed by Windwave) and Forestal (Silverfish) were displaying some eye-catching models at the show.

The Thok TK01 and MIG-HT are perfect examples of the ever-expanding appeal of e-MTBs, as the full suspension TK01 opens up the toughest trails with the uphill power of an e-bike, while the Hardtail MIG-HT combines cross-country characteristics with potential for a commuter machine.

On the eve of COREbike, Silverfish announced its exclusive partnership with Forestal to distribute its range of e-MTB models, and the bikes made their debut at Whittlebury Hall. 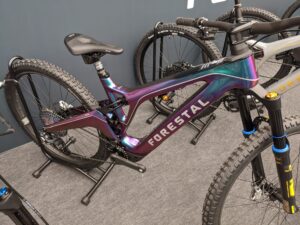 The Forestal range features an integrated touch-screen display with mapping, which is an exciting development for the adventurous trail riders spending a long day out in the woods. Conversations with Cumbria-based distributor Lyon Cycle revealed their spirit of adventure, which is most aptly demonstrated by apparel brand 7Mesh.

7Mesh, based in British Colombia, Canada, is a premium clothing company that offers kit for road, mountain and gravel riders. But it’s in their off-road kit that 7Mesh stands out most.

Taking inspiration from high-quality brands in other outdoor pursuits, like hiking and climbing, 7Mesh aim to offer clothing pieces that are both comfortable, warm, and breathable, without sacrificing style.

Another talking point for retailers is the in-house-built display stands that Lyon had used in its COREbike exhibition, which Lyon said can also be replicated in-store. Based at the foot of the Sussex Downs, Orro Bikes are an appealing brand for the drop-bar riders.

Offering a full range of carbon and aluminium bikes across disciplines, including fixed gear, time trial, gravel, and aero bikes Orro, distributed by I-Ride, takes pride in its British pedigree.

Limited-run colourways are also a unique selling point for Orro bikes, giving consumers a feel of individuality in their models. 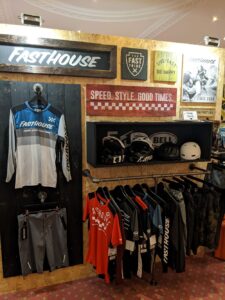 For consumers who just like going fast, FastHouse is a stylish and rough-around-the-edges clothing brand that epitomises the more hardcore types of riding – from BMX to downhill. 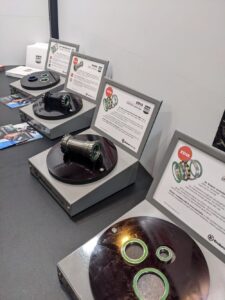 On the componentry side, Extra UK-distributed Enduro Bearings stood out amongst the rest, in part due to the expertise of co-founder Matt Harvey.

Rather than promises of watt-savings or weight-shaving, Harvey and his California-based team emphasise reliability in its bearings, which range from suspension to bottom brackets.

The highlight of the range is the TorqTite XD-15 bottom bracket, which come with lifetime warranty, and with a unique patent-pending design that replaces press-fit BBs and removes the need for glue, paste or type to try and keep the bearings quiet.

A full interview with Harvey will be appearing in the pages of BikeBiz in the near future. 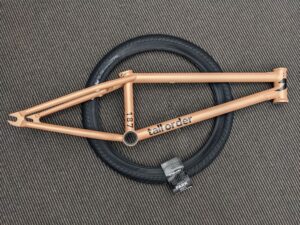 Political types often talk of ‘cut-through,’ referring to events in the political bubble that reach the consciousness of the wider public.

Rarely extreme sports can deliver this kind of reach, but that is exactly what happened when Newcastle-born BMX rider Kieran Reilly landed the world’s first triple flair earlier this year (think three backflips with a 180-degree spin thrown in).

Seventies Distribution, BMX distributor based in Hastings, can boast of its sponsorship of Reilly through its in-house BMX brand Tall Order.

The consumer experts at Cycling Plus, MBUK, and BikeRadar have announced their bikes of the …