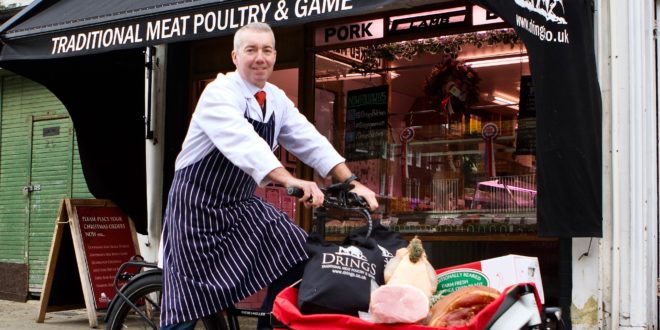 A butcher in Greenwich has cut its carbon dioxide (CO2) emissions by using an e-cargo bike for local deliveries, as part of a six-month trial delivered by Sustrans.

The project was commissioned by the Royal Borough of Greenwich, with the environmental impact of the van and bike being monitored over two-fortnight periods, from 27th June to 10th July and 25th July to 8th August.

During the trial, 95 per cent of local deliveries under five kilometres were made by the e-cargo bike, travelling over 200 kilometres in total.

The CO2 emitted fell by an estimated 75 per cent, with the e-cargo bike releasing less than 500 grams into the atmosphere, equating to a potential annual saving of 2,171 kilograms.

Sustrans is calling on the Government to deliver additional demonstration projects and build the evidence to show businesses the benefits of using the bikes.

Matt Winfield, Sustrans director, said: “This trial is a great example of the benefits of e-cargo bikes to other small businesses in London and clearly demonstrates that a cargo bike can be a faster and more economical mode of transport.

“This is because they have the advantage of travelling on quieter routes away from rush hour traffic, allowing the business to save money on fuel and provide customers with more on-time and flexible deliveries.

“This, coupled with the hugely positive environmental and health impact make it an obvious transport solution to motor vehicles.

“We believe that one of the biggest barriers to the wider uptake of cargo bikes is a level of scepticism of their capabilities by businesses.

“With leadership and urgent action, e-cargo bikes could make cycling a realistic transport choice for many companies and help to tackle the Capital’s chronic air pollution crisis, while reducing congestion on our roads.

“Alongside support for purchasing e-cargo bikes, the UK Government needs to prioritise investment in high-quality cycling and walking infrastructure and engagement initiatives to maximise the safety of cycling and ease of use of all types of bikes.”

Michael Jones, Drings owner, said: “I thoroughly enjoyed working with Sustrans and Greenwich in changing the way we make our deliveries. Plus our customers like seeing the butchers on the bike too.

“The bike is also just as efficient at making shorter deliveries and I haven’t had to fill the van up in eight weeks, proving that making the switch from diesel to e-cargo bike makes both business and environmental sense.”