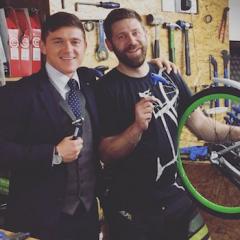 Dockless bike share firm Urbo is to launch in Enfield next year. The Dublin-based company is already in Waltham Forest. The expansion to Enfield will start in February.

The collaboration between Urbo and Enfield Borough Council will initially see the release of 100 dockless bikes, with the number expected to increase if demand for Urbo’s service rises.

Urbo’s first UK launch took place last month in the neighbouring borough of Waltham Forest – this expansion will allow residents in both boroughs to cycle and lock the Urbo bikes freely between the two boroughs.

The agreement between Urbo and Enfield Borough Council will run in conjunction with the Council’s Cycle Enfield initiative, which promotes active, healthy and safe forms of travel.

Urbo has been working with a number of local authorities across the UK and Europe, with further roll outs planned from early 2018.

Tom McGovern, co-founder of Urbo, said: “The bikes have proved a huge success in Waltham Forest. With this launch in neighbouring Enfield, it will allow us to provide riders in London with even more flexibility. The council has been pioneering the ‘Cycle Enfield’ initiative, which really strikes a chord with Urbo’s values for healthier citizens and better cycling infrastructure, and we are thrilled to support the scheme.”

Cllr Daniel Anderson, Enfield Council’s Cabinet Member for Environment, said: “This partnership with Urbo is fantastic news for Enfield’s residents. We are already transforming the look and feel of Enfield’s high streets and town centres, and by having a readily accessible supply of hire bikes available, this will go a significant way towards achieving Cycle Enfield’s main aim of increasing cycling participation in the Borough."