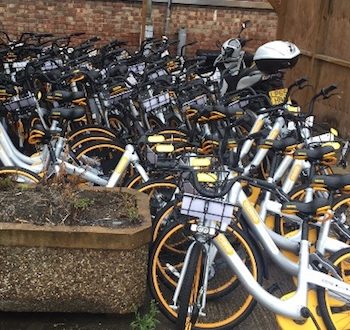 More than a hundred dockless bikes have been impounded by a London council because they have "blocked pavements" and are guilty of “blocking parking spaces." Pavement-parked cars have not been impounded by Wandsworth Borough Council.

The council reports that the "bike plague" was "being tackled."

"The company that’s flooded London with a rash of yellow rental bikes without any warning might be scratching their heads and asking themselves why so many have vanished from the streets of Wandsworth," says the council.

"The answer is that dozens have been impounded by the council for cluttering pavements and causing obstructions. Since they first started appearing last month, the council has confiscated 130 of the yellow oBIKES for blocking pavements.

oBIKES don’t use docking stations. Instead, users leave them wherever they please with other hirers tracking them down via an app.

"But this means that town centres shopping areas, the pavements outside tube and rail stations and other busy locations have seen an influx of abandoned bikes," complains the council.

"Masses have been found outside Clapham Junction station where they have blocked pavements and caused problems for pedestrians but also especially for people in wheelchairs and parents with buggies."

The council has told the company behind the scheme that it needs to re-think the way their business operates.

Transport spokesman Jonathan Cook said: “We all want to encourage cycling and other sustainable forms of transport but it is rather naïve to simply dump thousands of bicycles on London’s streets without any warning or discussion beforehand.

“We have received a flood of complaints about these bikes obstructing pavements, blocking parking spaces and even being chucked in people’s front gardens.

“We are happy to support an initiative that gets more people using bikes, but without a drastic re-think, and proper consultation with all the capital’s highway authorities this particular scheme, as it stands, is not the answer.”

BikeBiz has a long-form article on the dockless bike sector.