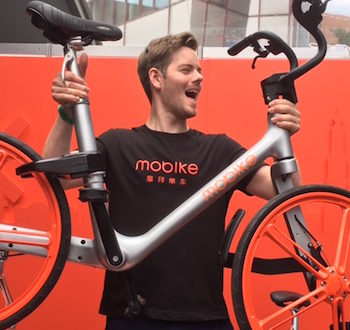 According to Shane Connaughton, dockless bike sharing will shake up the cycle industry, transform urban transport and, ultimately, reshape cities. The bike industry veteran is the CEO of Full Speed Bikes of Dublin, and he and his team are aiming to grab a slice of the dockless bike share industry. This new sector is taking China by storm and is being showered with cash from venture capitalists. Chinese companies such as Mobike and Ofo are spending big to flood Chinese cities with cheap-to-use release-by-app GPS-trackable bikes that young people, in particular, are flocking to use. And the Chinese companies will soon be massive here, believes Connaughton.

“This is the most disruptive thing that’s happened to our industry for a long time,” he said from his company’s stand at the Velo-city conference which finished on Friday. “The cash that is being pumped into the sector is unprecedented in the bike world.”

A 30-year veteran of cycle retail, Connaughton isn’t planning on directly competing with Mobike and Ofo – these Chinese start-ups are fighting to become the Amazon of the dockless bike sharing space – but he believes there will be a niche for a nimble, smaller Euro-based company to bag deals with hotels, towns, and smaller cities that might not initially interest the Chinese companies. (As the name suggests, dockless bike share schemes do not require expensive docks, which usually have to be installed with public subsidies.)

Mobike was recently linked to a takeover offer of Giant Bicycles of Taiwan, but even though such talk is little more than hot air the very fact that a two-year-old bike company (which also had a strong presence at Velo-city) could even be mentioned in the same breath as an industry-dominating 45-year-old one is notable.

“As a bike guy, I know the size of this industry, and dockless bike sharing is going to change everything,” Connaughton told BikeBiz at Velo-city.

Full Speed Bikes is aiming to offer better bikes than Mobike (which itself offers better bikes than Ofo). Over the last eight years Connaughton has sold £50-million-worth of childrens’ scooters and balance bikes into the Irish market. His business partner Ian Cameron runs the Cyclescheme-equivalant in Ireland. The start-up’s other managers include young brothers Tom and Brian McGovern who earlier this year sold their exams-cramming education business in a multi-million-Euro deal.

Full Speed Bikes has received equity funding and support from Chinese bike manufacturer Joykie, and from China’s Qibei, which developed the unlocking and app technology for Ofo.

Connaughton, seen above, secured these partnerships thanks to the time spent in China for his existing import business. He witnessed the explosive growth of Ofo and Mobike, and realised the Chinese companies would soon start eyeing up Western cities.

“I’ve seen this sector grow from nothing to its huge size today in just a few short years. The growth has been gob-smacking. A trawl for pictures of bike share bikes in Chinese cities will find mountains of bikes, but no amount of YouTube videos or articles prepares you for how many dockless bikes there are in China, and how well they are used, especially by young people. It’s absolutely staggering.”

He believes cities that embrace these bikes will be transformed by them for their better.

“It’s taken the Netherlands a long time to build up its levels of cycling, these bikes will see similar levels of use happening in other countries in just a few years. The convenience of the bikes is huge, so they are extremely well used.”

He believes the sector will need to better educate users on not to park the bikes where they shouldn’t be parked (all of the companies are trying to tackle this issue). One solution could be marked-out corrals, and with credits offered to incentivise use of them. (Connaughton envisages a £20 annual membership fee to use Full Speed’s bikes – right now branded as SuperCycles, but this could change – and then 50p per ride.)

“City leaders have to understand these systems are coming whether they know it or not,” stressed Connaughton. “As a bicycle advocate I love it because it’s going to put cities under pressure to truly cater to cyclists. Those cities that see the dockless bikes as a good thing will benefit because people will be able to get around a lot easier.”

As BikeBiz reported earlier in the week, Greater Manchester will soon start a six-month pilot scheme with Mobike. 1,000 bikes will be available in central Manchester and Salford.

At the start of 2016. Mobike operated one scheme in a district of Shanghai; by the end of its first year it had expanded to 100 cities. The Manchester trial is the first by the business outside Asia. (Ofo placed a small number of its bikes in Cambridge earlier this year – the original plan had been to drop 500.)

Mayor of Greater Manchester Andy Burnham welcomed Mobike’s trial: “As Mayor I want to see many more people swapping their cars for bikes and I will take a positive approach to promoting cycling across our city-region. This scheme could help make cycling more accessible to people, but it is an untested idea in the UK and we will need to keep this under review.

“We’re conscious that our city centre is a complex and busy area already, so TfGM has been working hard to establish a voluntary code of working with Mobike to make sure the service operates in a way that doesn’t inconvenience other road users, pedestrians or city centre traders. If successful, it could play an important part of our long-term plans for cycling in the region and for making travel easier and more sustainable.”

Mobike recently raised a further $600 million in funding in order to expand outside of China. Some of the company’s top executives were at Velo-city, including from China and other global territories such as Latin America.

“We will accelerate the pace of global expansion and our new target is to be in 200 global cities by the end of this year.”

Mobike and Ofo also have homegrown competition in China, with companies such as Coolqi and Bluegogo muscling in on the scene.

With many Chinese consumers having multiple bike share apps on their phones the dockless companies are trying to gain competitive advantage by offering better technologies, and better bikes, including women-specific models. Coolqi’s latest share bike aims to attract users thanks to its solar-powered on-board USB charger; Bluegogo’s new bike pumps out broadband access for users.

While dockless is clearly a hit in China it’s less certain that “dumping” bikes in American and European cities will work in the same way. The Chinese companies are only lightly regulated in their home market, but this will not be the case in America and Europe. Dockless bike share works best when there’s a bike or three on every street corner. Many US and European cities will bristle at such “littering” (even though many of these cities don’t bristle at cars parked all over the place, an eyesore many people believe to be a sign of a strong economy.)

Bluegogo launched in tech-savvy San Francisco earlier this year, but quickly pulled out after the city issued sector-killing regulations. Ofo had a short-lived trial in Austin, Texas, in March but there are no plans for a more permanent arrangement. And Ofo’s drop of a few bikes in Cambridge in the UK has yet to set the world alight.

And this is where Full Speed Bikes may win out – it’s aiming to work closely with cities rather than “dump” thousands of "rogue bikes" on street corners.

If Mobike, or one of the other Chinese players, becomes the Amazon of dockless bike share it could change its business model to be more like Full Speed Bikes. Right now the main Chinese companies in the sector are in a messy, fight-to-the-death battle (at some point the dotcom-style bubble will burst). It will be interesting to see which – if any – of the lavishly financed companies last the distance.