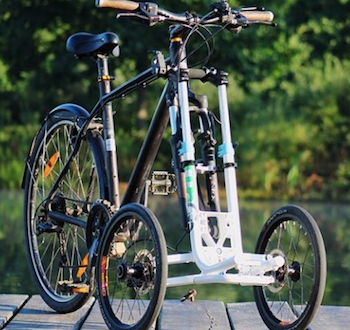 An Israeli inventor looks set for success after his detachable trolley that turns normal bike into a tilting cargotrike raises most of its Kickstarter target in a week. Designer Yadan Ofir has so far raised $70,258 of his $80,000 goal, and the Kickstarter campaign still has 24 days to go.

The TReGo load-carrying trolley attaches quickly to front forks – tool-free – with a proprietary quick-release mechanism, and replaces the front wheel with two smaller wheels that lean into turns. Detaching is also quick and easy, enabling the two-wheel trolley to be used for carting shopping and so on.

Share
Previous Time is running out to get your 30 under 30 nominations in!
Next Brompton becomes lead sponsor of cycleways-reviving project