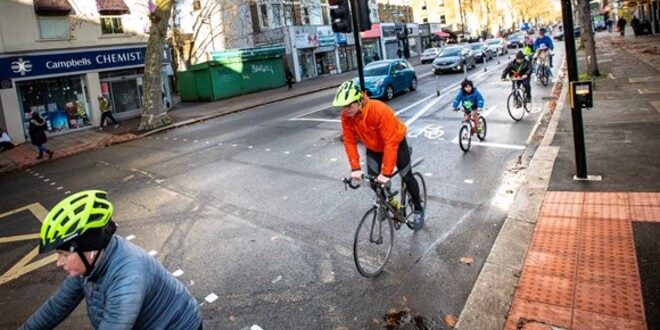 In December 2020, Hounslow Council introduced trial changes in Chiswick, designed and delivered by TfL, to enable people to make journeys in a safe and sustainable way, including to the many businesses along the road. These changes included a temporary protected cycle lane along Chiswick High Road.

The trial cycling route is an amended version of earlier designs for the Cycleway 9 route that had been supported in consultation before the pandemic and were delivered as part of Hounslow Council and TfL’s emergency response to COVID-19.

The new data from TfL and Hounslow Council demonstrates that cycling continues to increase on the already-busy corridor and that there has been a fall in cyclist collisions since its installation. The data shows that cycling along the trial route has increased by 72% on weekdays between February and April 2021. Up to 2,700 people a day are cycling along the route, including children and families.

Data from an air quality monitoring station in Chiswick High Road opposite Windmill Road also shows an overall improvement in air quality, with levels of nitrogen dioxide, nitric oxide and particulate matter that are consistently lower than before the cycle lane was installed.

Ensuring that people have space to walk and cycle safely will continue to play a central role in London’s recovery from COVID-19. Construction work along the rest of the C9 corridor will continue, with Hammersmith and Fulham Council set to start construction work on a section of its Safer Cycling Pathway between Goldhawk Road and Hammersmith gyratory in the coming weeks.

TfL commissioned independent representative research to get a balanced view from residents in the area. This research shows that there is support from residents for the protected cycle lanes on Chiswick High Road, with 47 %  in support of the scheme, compared to 43%  against. TfL and Hounslow Council said they have listened to feedback from local residents on the trial and looked carefully at the traffic data to see if changes can be made to improve the scheme.

Based on this evidence, Hounslow Council is due to make a decision in the coming weeks about tweaks to the scheme on Chiswick High Road which are intended to help improve bus journey times and reduce congestion in the area, including new eastbound and westbound bus lanes.

Will Norman, London’s walking and cycling commissioner, said: “This data shows the huge positive impact cycle lanes can have not only in enabling more people to cycle but also in reducing road danger and improving air quality.

“Chiswick High Road has been transformed by the trial lane, with cycling on weekdays up by almost three quarters and bikes now making up a fifth of ‘vehicles’ using the road during the day. We will continue to work with Hounslow Council and boroughs across London to do all we can to ensure a greener and cleaner recovery from the pandemic.”

Alexandra Batey, TfL’s director of investment delivery planning, added: “Ensuring that people in London feel safe when cycling is vital and we know that providing space for people to do so can make a real difference in boosting the numbers of people getting around by bike.

“This important new evidence shows that reducing car-dominance on roads such as Chiswick High Road can enable thousands of safer cycle journeys each week, including by children, families and others who have previously been put off by busy and intimidating roads. We’ll continue to work closely with local councils to ensure that London’s roads play a role in a green, healthy and sustainable recover from coronavirus.”

Since May 2020, more than 100 kilometres of new or upgraded cycle lanes have been built or are under construction, along with more than 22,500 square metres of extra pavement space reallocated for people walking.

The measures mean people are increasingly using bikes to get around their local area and for exercise, with recent TfL data showing cycling has increased by 22% in outer London compared to spring 2019, with a 7% rise in inner London.