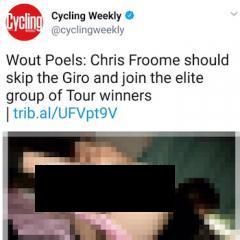 The magazine quickly tweeted: "Apologies for the previous tweet anyone who was offended. We have now re-secured our account."

However, a screen grab is already circulating on the internet. (The original photograph was not blurred.)

BikeBiz has asked Cycling Weekly how such an illustration could be, er, inserted in a standard news story. The mag has not yet come back to us.

In early September the Cycling Weekly editor had to issue an apology after an "idiotic" caption. Club rider Hannah Noel was described in the magazine as a "token attractive woman". Simon Richardson said the sexist caption beside the Hinckley Cycling Race Club member was "not a reflection of the culture in the CW office."

Share
Previous Want to make a difference to cycling in Wales? Here’s how
Next CeramicSpeed issues in-depth report on Muc-Off Nanotube Chain claims