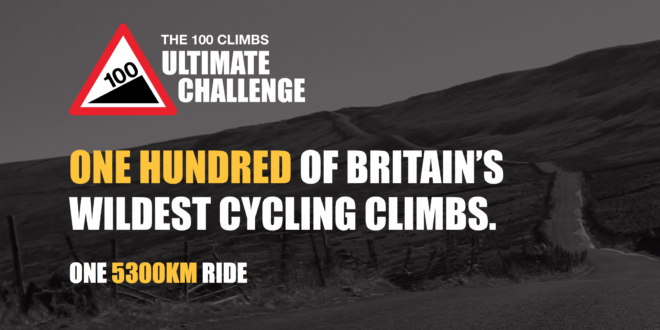 Three Cycling UK members are attempting 100 of Britain’s toughest climbs – but cycling between them all in just 29 days.

Dominic Millar from Guildford, Graham Salisbury from Liphook in Hampshire and James Findlater from Bristol, set themselves the challenge while looking for a UK-based ride that would take them to places they’d never visited before.

When someone mentioned Simon Warren’s cycling bible, 100 Greatest Cycling Climbs, the idea was formed to complete all 100 climbs and to cycle between them in one road trip across 5,300km over 29 days in August.

Millar commented: “The ride needed to be of a difficulty that would really test us, so people wouldn’t help but put their hands in their pockets to support our charities. Plus we wanted a challenge that would inspire people to join us on the journey.

“At six foot three inches tall, and even at a now hugely reduced 85kg, I am not built for going uphill, so what better challenge that tackling Britain’s 100 most iconic climbs?”

They have the support and backing of the 100 Greatest Climbs author Simon Warren, who recently joined the team when they launched the challenge in London.

He added: “When I heard about the challenge I thought it wasn’t quite impossible, but it’s certainly madness. A few people have ticked off the climbs one after another, but they’ve been driven between them. To ride between them all is going to be some challenge.

“To put it into context, the Race Across America, which is billed as the ‘world’s toughest bike race’ is only 4,800km, but this challenge is 5,300km!”

Graham Salisbury from Liphook in Hampshire said: “The hardest climb, looking at the book, seems to be Bealach na Ba near Applecross in the Scottish Highlands at nearly 9km with sections of 20 per cent gradient.

“However, talking to Simon, he has warned me about Ffordd Penllech in Gwynedd, Wales which starts with an unbelievable 40 per cent gradient, which I think would make it a black run as a ski slope.”