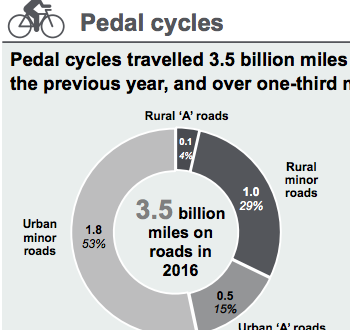 Cycle usage in Britain was 23 percent higher in 2016 than ten years previously, reports the Department for Transport. The DfT’s latest road traffic statistics report was published today and it reveals that – from a low base – cycle usage is on a steady rise.

However, car use is also on the rise – up by 2.2 percent year on year – and van use is growing even faster, a reflection of the rise of deliveries due to online commerce. There were 4.7 percent more "white man van" miles in 2016 compared to 2015.

Cycles travelled 3.5 billion miles on – or beside – Britain’s roads in 2016, 6.3 percent further than in the previous year, and over one-third more than 20 years ago. To the long-time annoyance of organisations such as Sustrans the DfT does not measure cycle traffic on canal towpaths, byways, bridleways or off-road parts of the National Cycle Network.

Four-fifths of the cycle miles ridden in 2016 were on minor roads.

In an acknowledgement that the cycle industry knows about only too well the DfT warns that "year-to-year changes in cycle traffic can be volatile due to factors such as the weather."